Two Killed As Five Trucks Are Burnt In Abia Explosion 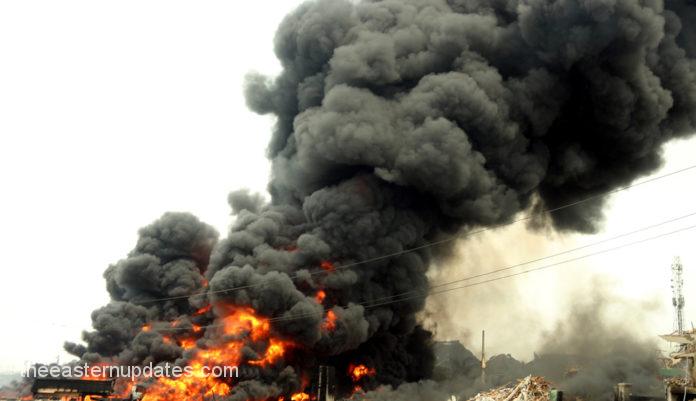 Belenta said the victims were suspected to be involved in oil bunkering as they were discharging petroleum products before daybreak.

The official confirmed that five trucks were consumed by the fire caused by the explosion at the site.

Belenta said personnel of the service eventually put out the inferno after mobilization.

The police took the corpse of one of the victims from the scene to the mortuary.

The other victim, who was rushed to the hospital, also did not make it.

In a related development, no fewer than two persons were burnt beyond recognition at Odumodu Umunya, along Onitsha – Expressway in Anambra State on Tuesday following an explosion.

According to an eyewitness who spoke to The Eastern Updates, the tyre of a tanker loaded with gas burst and it resulted in a collision with a shuttle bus. Hence, the accident caused the fire explosion at Odumodu Umunya, Oyi Local Government Area of Anambra State.

According to him, the incident was caused by a tanker’s tyre that burst and it resulted in a collision with a shuttle bus that led to the fire explosion.

Facebook
Twitter
WhatsApp
Email
Telegram
Previous articleSuspected Motorcycle Thief Set Ablaze By Mob In Imo
Next articleAhead Of 2023: The Reality, Ndigbo Must Come To Terms With