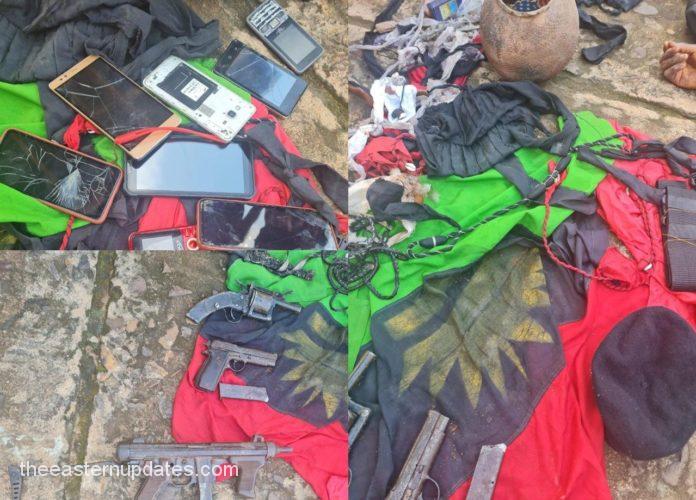 The Anambra State police have confirmed the killing of a leader of one of the gangs terrorising Anambra State and also arrested a native doctor and five other persons for questioning.

A source in the area said: “The gunmen had entered Oko through Nanka for a kidnap operation and almost succeeded but for the prompt intervention of the police special force acting on a tip-off which engaged them in gunfire battle.

Read Also: Two Killed As Fire Breaks Out On Accident Scene In Anambra

“While one of them was killed others escaped with various degrees of injuries.

“The gunman killed at Oko was identified as a former vigilante who was part of a four-man gang who have been involved in high profile killings and kidnapping around the area.”

The state police command while reacting through the spokesperson, DSP Toochukwu Ikenga confirmed the report but was unable to account for the killing of the vigilante member who later joined the criminal gang.

He said the command received a distress call about the kidnap of two persons at Oko and while on their trail, they learnt that the gang had kidnapped two more persons at Ekwulobia and quickly pursued them and were able to track them down.

Ikenga said based on information: “Police operatives working with the vigilante stormed the location, on Sunday, rescued the four victims and arrested one Emeka who was suspected of complicity.

“Upon interrogation, he confessed to the crime and led detectives to the hideout of his gang in Oba, Idemili South, where a shootout ensued. The gang leader, Chinedu Ajogu, AKA Sampolo was gunned down and five other persons including their native doctor arrested for interrogation,” Ikenga said.

He listed some of the items recovered at the criminal hideout to include; one SMG rifle, one beretta pistol, two locally-made revolver pistols, a dagger, one Biafra flag and a pair of ESN uniform.

Others are two berets, two web belts, assorted charms and one Acura SUV vehicle, which was said to have been reported to have been snatched from a Reverend Father in Awgbu.

He said the suspects were being interrogated with a view to eliciting information on their involvement in previous criminal activities.