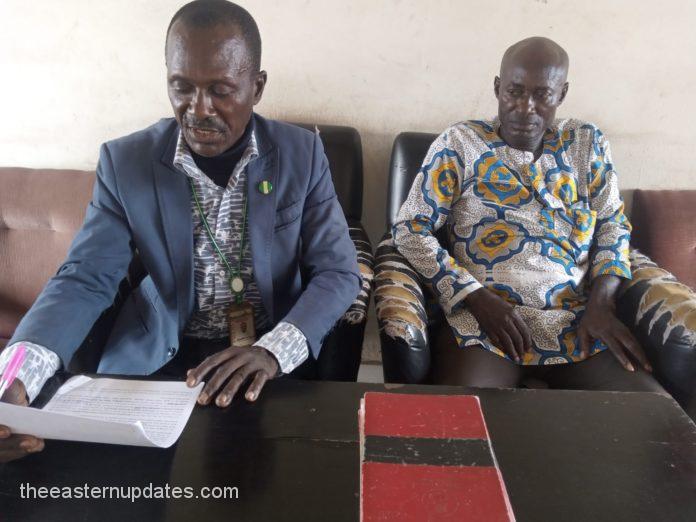 There has been some serious tension in the Emudo Nenwe Community because several years after the traditional Monarch, His Royal Highness Igwe Dr Goddy More Orji passed on, it has become difficult to find his successor thus throwing indigenes into a state of panic.

The Eastern Updates can report that the development, which has polarized the community, has soaked the area with tension.

Briefing journalists at the Enugu Press Centre, Godwin Chukwu and Philengels Udeinya Ukaegbu, who spoke on behalf of the concerned stakeholders of the Emudo community, urged the Enugu State Government to intervene and ensure a lawful resolution of the matter.

The stakeholders stated that the community “has since and particularly upon the demise of our Late Igwe Dr Goddy More Orji of blessed memory, been in great ruin, grossly dislocated and thereby throwing the people and community into utmost quagmire without any hope of gathering our broken pieces together in the nearest possible time.”

They called on the opposing group to shield their swords “and embrace dialogue, peace and brotherhood, so that we can all breathe air of good trado-cultural rulership, acceptable town union leadership and accelerated good governance at both ends.”

The stakeholders lamented that “the truth is that Emudo Nenwe politico-cultural rulership is now in a total mess and a complete shambles and a shadow of what Late Igwe IOM Nwonye left behind.

“The truth of the matter, is that everyone is now aware that the purported present Town Union leadership in Emudo Nenwe, wangled itself to power through the back door, setting the Town Union Constitution aside unlawfully spiking most Union members, EDUN General Assembly, the people, and the stakeholders to undue aggression, grieve, disagreement and counter disagreements.

They noted that while the people were still nursing the wounds and injuries over the “illegal town union”, “the cabals have gone ahead to announce the sales of form to our people who are presently living in abject fear of their live, properties and that of their loved ones for Igweship race with no concern for the plights of the Ordinary Emudo person.”

“These wolves in sheep’s clothings are, however, presently, furthering their calamitous effort to select their preferred puppet Igwe and impose the same on the people as against their wish. In truth, the EDU-N constitution has no provision for a caretaker committee, rather, a Central Executive Committee CEC.

“We are, therefore, calling on the Federal and the State government, Ndi Emudo Nenwe home and abroad, our illustrious sons and daughters and indeed the EDUN stakeholders, as well as our friends, neighbours, associates and lovers of Emudo Nenwe and indeed the Enugu State Ministry of Rural Development who is said to be the champion of this irregularity, as the umpire in this regard, to please wake up and come to our aid before Emudo Nenwe is completely doomed.

“Emudo Nenwe is at the verge of total breakdown and anarchy,” they cautioned.