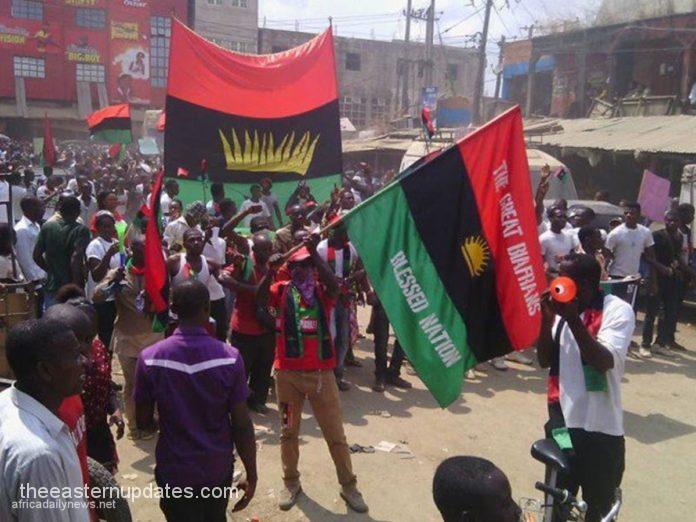 As the aftermath of the attacks in Anambra State wane on, the Indigenous People of Biafra, IPOB has openly denied and distanced its members from the beheading of a member of the Anambra State House of Assembly, Okechukwu Okoye who was abducted and beheaded during the weekend.

The Indigenous People of Biafra openly fingered the fifth columnists as the culprits who beheaded Okoye and they opined that they have been bent on destabilising its struggle in the southeast.

Spokesman of IPOB, Emma Powerful, described Okoye’s murder as an abomination which has nothing to do with the Eastern Security Network, ESN.

Read Also: How IPOB Is Deceiving Our People, Telling Them Lies – Umahi

A statement by Powerful reads partly: “We the global family of the Indigenous People of Biafra (IPOB) under our great leader Mazi Nnamdi KANU strongly condemn the abominable beheading of Hon. Okechukwu Okoye who was abducted a few days ago in his area. We want to also state categorically that contrary to insinuations in some quarters, the Indigenous people of Biafra IPOB could not in any way have had anything to do with this abominable act. It is imperative to state here that enemies of Biafra freedom and traitors in our region are seriously pulling all stunts to derail the freedom of our leader and the freedom of our dear Nation Biafra.

“After thorough investigations by our intelligence team, we found out that the abominable beheading of Hon Okechukwu Okoye is the system of the fifth columnists who are bent to destabilise the efforts of the Indigenous People of Biafra IPOB. These barbarians have been well mobilised financially and otherwise by DSS, NIA and DMI to create anarchy in our land in an attempt to derail our march to freedom.

“They will commit these heinous crimes and their paymasters will use the Nigeria compromised media houses to accuse IPOB of being responsible for what we know nothing about. The question is why is IPOB being demonised unnecessarily? The simple answer is that we are fighting for the freedom of our people because we rejected their forceful take over of our land.

“The IPOB intelligence unit working round the clock discovered the gimmicks and antics of Nigeria government and its security agencies, especially the Army, DSS, Police, NIA and DMI intelligence. Those pointing accusing fingers at us are the same people sponsoring the disturbing insecurity in our land. BIAFRA LAND has been infiltrated by fulani terrorists wearing Nigerian security uniforms and operating under this guise as agents of death and destruction of Biafraland.

“IPOB is not in the business of kidnapping or car snatching and has never been and will never be and therefore we absolutely has nothing to do with the kidnap of Okechukwu Okoye. These kidnappers, kidnapped this man on the day the Executive Governor of Anambra State, Professor Charles Chukwuma Soludo visited our leader Mazi Nnamdi Kanu in the DSS custody and every member of IPOB was very happy because he was the only Governor in the whole of Biafraland who summoned the courage to visit our leader in Abuja since his extraordinary rendition from Kenya to Nigeria.

“IPOB/ESN cannot behead our brother and dropped notes bragging that we are behind the gruesome murder. The world should take note of the similarity between the beheading of this lawmaker and the way they gruesomely murdered the two army couple last month.

“Governor Chukwuma Soludo must prepare to meet these evil men humiliating and killing our people head on.”