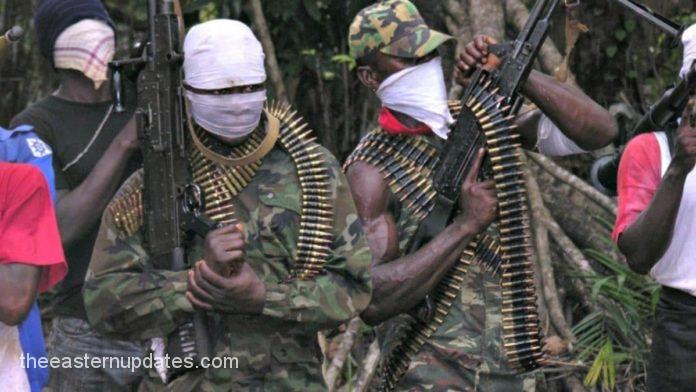 Things have proved to be quite intense in the Southeastern region with the Sit-at-home enforcements that have been slammed as the security forces are having a hard time keeping some arsonists and other bad factors at bay.

The police in Imo State said they have killed six suspected members of the outlawed Indigenous People of Biafra (IPOB) who attempted to attack the palace of a traditional ruler in the state.

The incident occurred on Monday at about 8 a.m. in Orlu Local Government Area of the state.

The suspects were said to have fired sporadic shots while advancing towards the palace of Emmanuel Okeke, the chairman of the Imo State Traditional Rulers Council.

The police spokesperson in the state, Michael Abattam, who disclosed this in a statement on Monday, said the gunmen were killed during a joint operation with the men of the Nigerian Military.

He said the gunmen engaged the combined team in a shootout as soon as they sighted the security agents.

“In the exchange of gunfire that ensued, the hoodlums were overwhelmed due to superior fire-power of the combined team and in the process, six of the hoodlums were neutralised while others escaped with various degrees of gunshot injuries,” he said.

The spokesperson, however, said the gunmen threw an explosive device at the team, which destroyed one of the vehicles of the combined team.

One pump action gun, three blood-stained cutlasses and three vehicles were among the items recovered during the operation, according to the police.

Mr Abattam said calm has been restored in the area and that the corpses of the gunmen have been deposited in the mortuary.

Attacks by armed men have increased in the Southeastern region in recent times. he attacks often target security agencies and government facilities.

It was also gathered that IPOB members allegedly entered schools in Okwe area of Asaba and chased out schoolchildren and teachers.

At the popular Ogbogonogo market in Asaba, business activities were paralysed in the early hours of the day as traders stayed away from their shops.

It was observed that most of the shops were not open for business until 12 noon when traders were seen milling around, observing the situation so as not to be caught up unexpectedly by the hoodlums.

It was also gathered that unknown gunmen shot indiscriminately at Bonsaac which allegedly led to the death of one person, thereby creating apprehension in the state.

When contacted, the state Police Public Relations Officer, Bright Edafe, said he was not aware of the killing even as he stated that the command had drafted personnel to every nook and cranny of the state to provide security for the people.