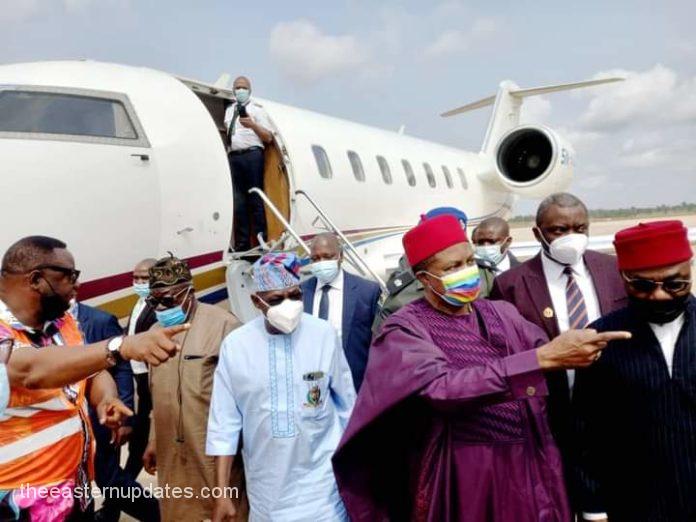 Anambra State Governor, Willie Obiano was on hand to receive the African elder statesman when he arrived on Tuesday at the airport which would be remembered as one of his signature projects.

Obasanjo on arrival rated the airport high in terms of standard and class while praising the Governor for the quality of work done at the site.

The Eastern Updates gathered that the Vice Chancellor of Nnamdi Azikiwe University, Professor Charles Esimone was also present at the airport to receive the former President.

Obasanjo was the chairman of the event which was held at the ASUU Secretariat Conference Hall, Nnamdi Azikiwe University, Awka.

The event was the maiden edition of the Chief Emeka Anyaoku Institute for International Studies’ symposium which would now be held yearly.

The former President is expected to later head to Umuahia, Abia State, for another event holding tomorrow, Wednesday, being organised by Vision Africa.

Obasanjo had last week celebrated his 85th birthday in grand style. He had participated in a novelty match played at the 5 Aside football pitch of the Olusegun Obasanjo Presidential Library in Abeokuta, the Ogun State capital.

The event drew the presence of the 91-year-old President of Benin Republic Nicephore Soglo, a former Minister of Justice and Attorney General of the Federation, Chief Bayo Ojo, among others sports enthusiasts who took part in the game.

Former President Obasanjo, who was the captain of his team displayed his dexterity in the art of football as his team defeated the Ogun State Government led by the Deputy Governor, Noimot Salako Oyedele, by four goals to two, with the former president doing the goals.