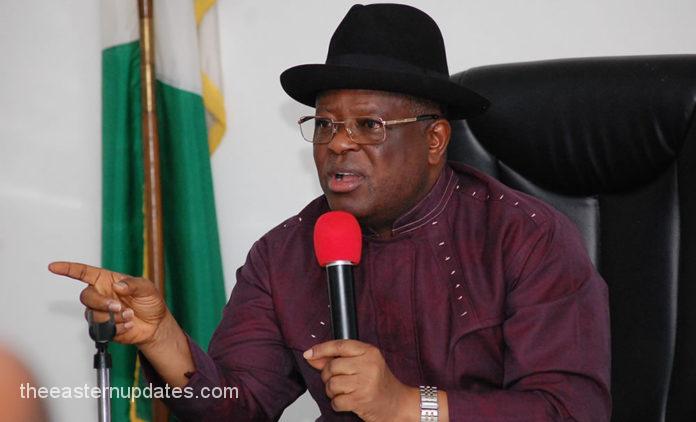 Ebonyi State Governor, David Umahi has reacted to the judgement of the Federal High Court in Abuja which had earlier declared his seat and that of his Deputy, Kelechi Igwe, vacant.

In his reaction, Governor Umahi declared that Justice Inyang Ekwo lacks the power to remove him from office and has put the judiciary on trial.

The Peoples Democratic Party (PDP) had approached the court, asking for Umahi’s removal after he defected from the party to the All Progressives Congress (APC) in November 2020.

Citing section 221 of the constitution, Justice Inyang Ekwo ordered the PDP to immediately send names of replacements to the Independent National Electoral Commission (INEC) so that fresh elections can be conducted.

Justice Ekwo also ordered INEC to cease from recognising Umahi and Igwe as the governor and deputy governor of the Ebonyi State.

Delivering judgement in the case, the presiding judge, Justice ordered the governor and his deputy to vacate office, adding that their defection was illegal, null and unconstitutional.

The governor insisted that such ruling was not a good development for the Judiciary and must be overturned in due course.

The Eastern Updates had earlier reported that Justice Inyang Ekwo of an Abuja Federal High Court had sacked Umahi as governor of Ebonyi State and his Deputy, Dr. Kelechi Igwe from office over their defection to the national ruling party early last year.

The judge sacked Umahi and his Deputy over their unlawful defection from the Peoples Democratic Party, PDP, to the All Progressives Congress (APC).

He ruled that the governor and his Deputy’s defection was unlawful, unconstitutional, null, and void.

The judge ordered them to vacate their offices immediately without further delay. It remains to be seen if Umahi would be appealing the ruling.