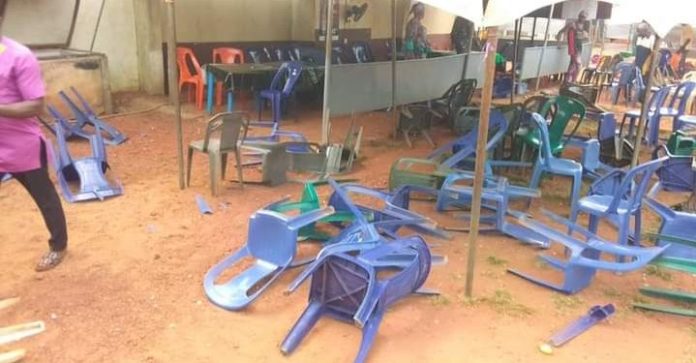 Ahead of 2023 general elections in Enugu State, the scarmble over who will occupy the lion building, the State government seat of power, and other elective positions in the State, members of People Democratic Party (PDP) in Nsukka Local Government Area of Enugu State are divided on whom to support as the party governorship flag-bearer in Enugu State.

Mr Enerst Ogwo, the coordinator of Oganiru Ndi Enugu State in Nsukka LG while speaking with newsmen In Nsukka on Monday alleged the group was attacked on December 5th while holding its meeting at Meetings Point Joint, Ogurugu Road Nsukka.

Ogwo said Oganiru Ndi Enugu is a PDP pressure group under PDP that advocates for good governance, has its membership across Enugu State.

He said that the members of the group was having its general meeting at the Joint when no fewer than 40 thugs bashed into the meeting venue with gun, machete, and other dangerous weapons, shooting sporadically on air.

‘The thugs break plastic chairs, tables, beer bottles and any available objects, hitting them on members present in the meeting.

‘They also snatched phones and some amount of cash from our members who scampered for safety, personally I lost N50,000 in pocket to the thugs,’ he said.

The coordinator explained that the only sin the group committed was its support for Ekweremadu’s governorship ambition in Enugu State in 2023.

‘Other members of PDP in Nsukka LG can choose the person they want to support to contest for governor but for those of us in Oganiru, we are supporting Ekweremadu,’ he said.

He alleged that Mr Cosmas Ugwueze, the Council Chairmen of Nsukka LG sponsored the thugs and was present to supervise the attack on that fateful day.

He also alleged that Ugwueze had approached him in the past and told him to withdraw from the group and retract his support for Ekweremadu.

‘I told him that the group has right to support any PDP member in 2023 governorship race that will give Enugu State residents good governance.

‘I was not surprised when he brought thugs to attack and disrupt our meeting,’ he said.

Ogwo however explained that, the group had been in existence for a long time with Enugu Governor as the grand patron.

‘Gov Ifeanyi Ugwuanyi, the Enugu State Governor is the Grand Patron of the group while Ekweremadu and some national assembly members in the state are Patrons’ he said.

The coordinator said the group had reported to police over the attack of their members by thugs sponsored by Nsukka Council Chairman.

Reacting to the alleged sponsored attack, Ugwueze described the allegation as false, baseless, unfounded and a deliberate attempt by Ogwo and the group to tarnish his image.