HomePoliticsHURIWA Blasts Buhari For Referring To All Igbos As IPOB
Politics

HURIWA Blasts Buhari For Referring To All Igbos As IPOB 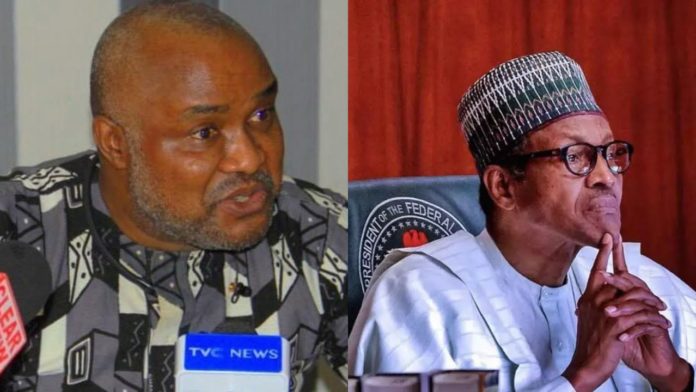 Human Rights Writers Association of Nigeria, HURIWA has asserted that Muhammadu Buhari is not worthy to be called the President of Nigeria.

HURIWA also claimed that President Buhari’s method of keeping mute and confining himself to the comfort of the villa appears to be the best option since his recent comments are divisive.

The rights group said the President must henceforth return to his old ways and speak less because, as HURIWA noted, his public speeches of late rather than give hope and faith in the unity of Nigeria, evoke old faultlines threatening to tear Nigeria apart.

HURIWA, in a statement signed by its National Coordinator, Emmanuel Onwubiko, noted that Buhari’s speeches have increasingly become more negative, bellicose, divisive, and totally out of touch with the realities on ground.

Furthermore, HURIWA berated the President for showing a poor appreciation of the problems of insecurity in the Southeast during his interview with Arise Television on Thursday, by comparing the Indigenous People of Biafra, IPOB, to the whole of Igbo ethnic group (Ndigbo).

Buhari had said during the interview that, ‘IPOB is just like a dot in a circle. Even if they want to exit, they will have no access to anywhere‘ vowing to organise the police and the military to pursue them.