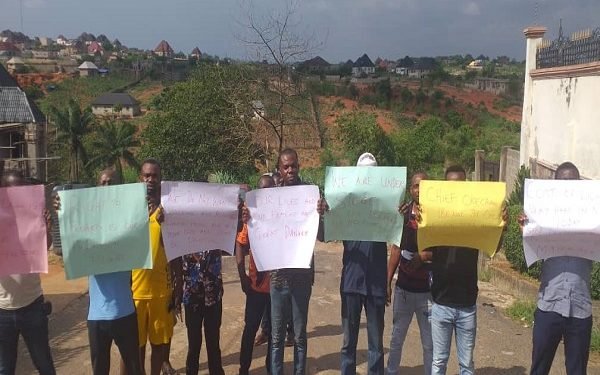 Landlords and residents of Egwuatu Estate, Abata Nsugbe in Anambra State on Monday protested the alleged invasion of their community by suspected land speculators.

They disclosed that scores of residents have been forced to flee following destruction of property, infliction of injury and other forms of violence meted on them by the attackers.

The protesters carried placards with various inscriptions namely: ‘Governor Obiano, IGP, save us from our oppressors; ‘Right to ownership of properties is our fundamental right” and “Our lives and that of our family members are in great dangers, save our souls’ etc

Chairman of Egwuatu Landlords Association, Emeka Ojukwu, alleged that a certain chief in the area stormed the community with no fewer than 20 thugs and a bulldozer, pulling down structures and destroying buildings and other materials.

He said: ‘We acquired legitimate properties from the Egwuatu family over 15 years ago and have all lived peacefully in the area without any dispute from any quarter until the latest invasion from strange people.

‘The attackers also invaded my compound and ransacked my properties while most of the residents of the estate cannot enter their homes presently for fear of losing their lives.

‘We have restrained from resorting to self-help or bringing our own thugs to fight for our rights too. Instead, we’ve petitioned the Police authorities in Abuja, Zone 13 Ukpo, and the Command Headquarters in the State.’

Confirming the incident, Police spokesperson, Ikenga Tochi said preliminary investigation revealed the case was that of encroachment and boundary dispute.

‘Police have waded into the matter to forestall crisis while some persons have been invited for questioning. We advise parties involved to maintain peace and explore legal options where necessary,’ he said.