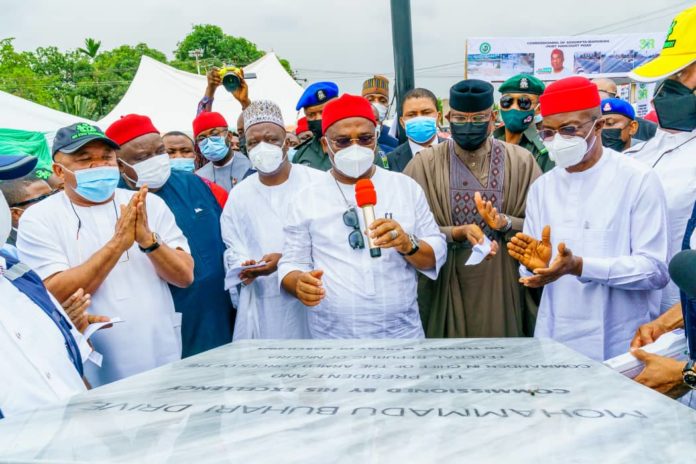 This came as of the president commissioned the road as part of activities marking the one-year anniversary of the government.

Speaking on the occasion, Buhari urged Uzodimma to sustain the momentum of efforts of his government to provide infrastructure and improve the welfare of the people of Imo State.

Read Also: Okorocha Begged Me To Cover His Illegalities – Uzodimma

The President commended the vision of Governor Uzodinma which he said has brought about the completion of projects being commissioned within one year in office.

He lauded the governor on the completion of the Assumpta to Hospital junction road as well as the World Bank to Federal Secretariat road respectively, describing the two roads commissioned on his behalf by the Imo State Governor as “quite symbolic and strategic.”

Buhari said: ‘The first road, the Assumpta to Hospital junction road, is the gateway to the South-South from the South-East.

‘The second road, the World Bank to Federal Secretariat road, is an important access way to the federal government secretariat and a major connecting link road between the residents of the densely populated World Bank area of the state and the rest of the state capital.’

Buhari said he was aware that in the first year in office of Governor Uzodimma, the government had embarked on an ambitious target of executing 46 road projects, noting that the Governor is transforming the state with the projects.

The president added: ‘I am glad to learn that significant strides are being made towards their completion, and a number of them are amongst those being commissioned as part of the events in honour of the one-year anniversary.

‘I must commend the State Government, under the leadership of Sen. Hope Uzodinma, for setting ambitious targets and within just one year in the office using this moment to evaluate the journey thus far.

‘It clearly demonstrates the commitment of the government to the welfare of the people.

‘I feel happy to learn from Governor Uzodinma that the policies of our administration and the manifesto of our party, the All Progressives Congress (APC), have greatly influenced his resolve to make a difference in Imo State. I pray that you will keep the flag flying.’

While urging Governor Uzodimma to sustain the momentum and accelerate the pace of good governance in the State, the President also congratulated him for the feat within one year and noted that the infrastructure in place will go a long way in making life better for Imo people, residents and visitors alike.