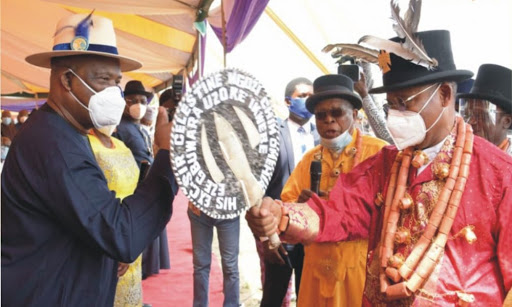 Also, the Kalabari people have urged Ogoni to support them in their clamour to produce the next governor of the state in 2023.

They lamented that 24 years after the new political arrangement in 1999, the riverine has not produced a governor.

The two ethnic nationalities expressed this at a unity meeting between chiefs and opinion leaders of Ogoni Liberation Initiative (OLI) and Kengema Unity Forum (KUF) held in Usokun, Degema Local Government Area of Rivers at the weekend.

It was gathered that OLI and KUF arranged the unity meeting to define their environmental, economic and political future in the state.

Speaking, the leader of KUF, Sobomabo Jackrich, said it was important that the two ethnic groups in the state had the meeting for the sake of unity and economic purposes, considering developments in the state.

Jackrich, in his speech titled: Movement for the Actualization of Upland/Riverine Dichotomy for Peace, Equality, and Justice, noted that the two major ethnic nationalities in Rivers share similarities in terms of terrain, socio-economic and political marginalization.

He said: ‘However, the stories of environmental devastation, economic and political marginalization suffered by these major tribes inflicted on us by the state and federal government despite providing over 80 percent of the economic stay of the state, can only be better imagined.

‘To further worsen the situation, by our political sequence, we have seen a deliberate effort by some of our upland brothers who seem to have taken advantage of our seemingly discordant posture with a calculated move to hold on to power for 24 years, and deliberately politicizing the development of the state.

‘It has, therefore, become necessary for us to work together, stand by each other to fight and gain back our socio-economic and political freedom, destiny as a people’.

Jackrich said that the idea of the upland/riverine dichotomy in the political events of the state was not new, but dates back to the era after the creation of the state.

He explained that upland political leaders led by late Dr. Obi Wali and Ken Saro-Wiwa used the upland/riverine divide as a defining terminology to describe the Ijaws and their mainland neighbors in the old Rivers State.

The KUF leader regretted that since the emergence of Dr. Peter Odili from 1999 to 2007, power has not been given to the riverine as earlier agreed, adding that there would be a need for the riverine to be considered in 2023.