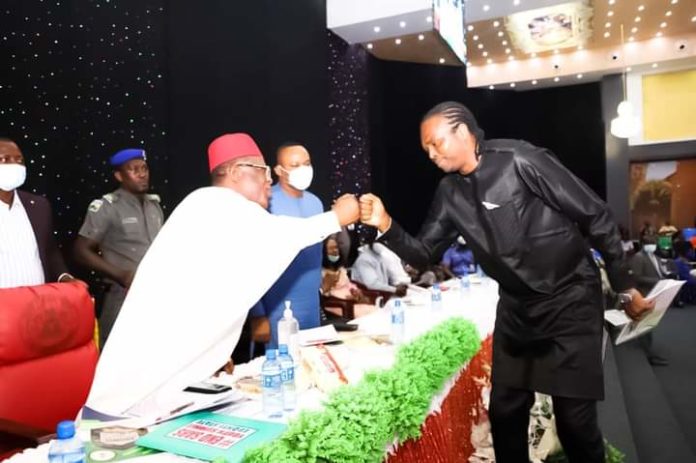 The football greats were among the resource persons that made presentations during the #endSARS youth summit organized by the Ebonyi state government.

Making his presentation, Kanu Nwankwo, the former captain of Nigeria super Eagles, said he was highly impressed on the Infrastructural development that has taken place in Ebonyi State under Governor Umahi.

He said when he set his foot in Ebonyi state, what he saw made him wonder whether he was abroad, and described Ebonyi state as a ‘London in Nigeria’.

Kanu Nwankwo who described Governor Umahi as a special gift to the people of Ebonyi State, suggested that for Nigeria to enjoy quality leadership that will engender total peace and economic development, based on his experience in Ebonyi State, Governor Umahi should be given the chance to replicate his good works at the national level, stressing that the country needs Umahi as their next president.

Kanu called on the Nigerian youths to develop interests in sports and education, which he said were the major leeway to success and greatness among the youths describing sport as a unifying factor.

He charged the youths as leaders of tomorrow to always work hard so as to become the best in their chosen careers.

In the same vein, the former super eagle goalkeeper, Peter Rufai, also commended governor Umahi,for his leadership ingenuity, which he said has marked Ebonyi state out as the fastest developing state in Nigeria, stressing that governor Umahi deserves to become the President of Nigeria come 2023 to showcase his God-given gift at the national level.

He commended Umahi for lifting the ban on sporting activities in the state and urged the youths to display their potentials.