HomeEditorialMuch Ado About The Importance Of Kolanut In Igboland
Editorial 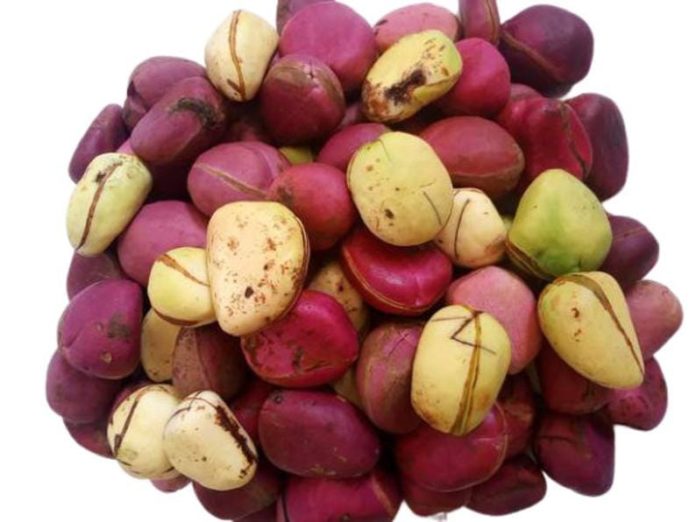 Kola nut is not only known for it’s origin to many American and European soft-drinks as well as it’s chewing by labourers to diminish hunger and fatigue, but even more for its sacred significance in Igboland.

Kola nut is the fruit of the kola tree, a genus of trees that is native to the tropical rainforests of Africa. The caffeine-containing fruit of the tree is used as a flavouring ingredient in beverages and is the origin of the term ‘cola.’

The fruit is grown in the western part of Nigeria. Among Yorubas, there is a thriving Kola nut business. The Hausa people of Northen Nigeria casually consume Kola nut as a snack. To the Igbos, the Kola nut means a whole lot more. They believe the kola tree was the first tree on earth and therefore its fruit, the first on earth. The Kola nut has several traditional significances to many tribes in Nigeria. However I am focusing mainly on the Igbos.

Scientifically, kola nut is referred to as Cola acuminata. The Hausas call it gworo, the Yorubas call it Obi while the Igbos Oji or more commonly Oji Igbo.

The Igbos believe that ‘kola is life’, kola symbolises peace. This is why an Igbo man would welcome you with kola nuts when you visit his home, saying ‘onye wetere oji, wetere udo’, which translates to ‘he who brings kola, brings peace.’

This is the main reason why the Igbo do not use the gworo or cola nitida for rituals or in serious traditional celebrations. Kola with three cotyledons is called ọjị ike, ọjị ikenga, that is, kola of the valiant. Only warriors or brave men and consecrated or ordained persons are permitted to eat this kola, as a matter of principle. Kola with four cotyledons is called ‘ọjị udo na ngọzi’, that is, ‘kola of peace and blessing’. It is the normal kola. The number four is very sacred among the lgbo.

Kola with five cotyledons is ‘ọjị ụbara mmadụ, ọmụmụ na ụkwụọma’ that symbolises increase in procreation, protection and good luck. Kola with six cotyledons indicates communion with the ancestors, that is, ‘ọjị ndi mmụo na ndi mmadụ jiri gbaa ndụ’. The smallest part or cotyledon is not eaten but is thrown away for the ancestors to eat. In like manner, kola with one cotyledon is not eaten by man, that means that it is not broken during ceremonies because it belongs to the ancestors, an attitude reminiscent of the direct link between the living and the dead in Igboland. Kola with seven cotyledons is a sign of good omen, it symbolises prosperity. However it is rarely seen or broken.

Kola nut is so important in the life of the Igbo to the extent that poetry of kola nut breaks the day for a typical Igbo home.

It is therefore  not unusual to hear along side Christian families, who conduct their morning prayers, also the prayer voices of  their traditional Igbo brothers, who welcome the birth of a new day with  kola nut invocation:

It is also for this reason that kola nut ritual has become the rallying vehicle in every Igbo man’s socio- cultural and religio- political activities. Nothing is said at any event, no matter how serious the occasion may seem without the observation of kola nut ritual.

Ọjị (kola) is the first thing served in every function or ceremony, personal or communal agreements, welcoming of a visitor to an Igbo home, and settlement of family disputes. The Igbo welcome is incomplete without the presentation of kola nut. In the case whereby the host in a social gathering fails to present kola to his guests, he would have to make explanatory apology as to why kola was not provided. The kola nut is presented on a dish or saucer, or more precisely, on a wooden platter prepared and kept for the sole purpose of presenting kola nut. In the dish are one or more nuts. The owner first takes a nut and puts it to his lips, thus signifying that it is about to be offered in good faith. This symbolic gesture proves him to be free from malice. The dish is, thereupon, passed to the visitor.

The kola presentation symbolises peace and welcome; and if one makes a mistake while carrying the kola round, he is traditionally dealt with according to norms in different communities. Such an error is considered as very grave and indicates that the offender is not so responsible and may not be a reliable person.

The blessing of kola, is the right of the eldest person in any gathering or it may be that of the Eze (king) as the case may be. However, the oldest person is preferred in most cases because he is the custodian of truth and closer to the ancestors. In the evolutionary trend of the tradition, an ordained minister or one consecrated to God now takes precedence in the blessing of the kola; but the eldest person or the king who has this right will give or transfer it to minister as a privilege, not as a right.

The principle behind this Igbo kola culture is that the nut cannot be broken without the saying of prayers or incantations by the eldest in the gathering. This has given rise to the proverb ‘He who brings kola brings life’, because in the kola nut prayers, the elder in addition to his wise sayings normally requests for peace, prosperity, long life, happiness and protection from all ill fortunes.

Not only do the Igbo say prayers before the breaking of the kola nut, no traditional Igbo would drink or eat without sharing at least, with the ancestors. ‘The kola nut, a symbol of life and commensality.’

Why Kola is Always Broken with a Knife

Kola is preferably broken with a knife rather than by hand which can be done equally as easily. Many claim it is broken with a knife due to health reasons, that is for hygienic reasons. Some say it is because kola is sacred, and as much should be treated piously.

The popular reason is that the kola is broken with a knife as a mark of honour to it because it is not up to the size of a piece of yam which people bite and chew. The remote reason is essentially religious, for people who have shed blood develop a ‘strong hand’ – ‘aka ike’ and may not break the Sacred Kola for others using the soiled or profaned hand or bloody hand. The sacredness of the ọjị (kola) stems from the fact that ọjị is the Igbo symbol of life.

Why Women do not Break Ceremonial Kola

The high degree of sanctity accorded the Kola nut throughout lgboland is likened to that of the biblical ‘forbidden fruit of Paradise’ in the sense that women are forbidden from either planting, climbing, plucking or breaking the Kola nut. This does not mean that men are holier than women in Igbo society — no. It is just a question of a mentality similar to the biblical regard for women.

The denial of women’s right to break Igbo ceremonial Kola is more of social character and organisation and does not in any way imply inferiority towards women. Women do break the Igbo kola when they gather in their usual cultural groupings where no man has a saying. On the contrary, Igbo women have their cultural organizations which are completely independent of men.

Emotional and cultural attachment to kola nut in Igbo land makes it religiously infectious. Adherents of the culture of kola nut, which without exaggeration involves every Igbo of religious belief, gender and caste find in the kola nut lobes a   cultural vehicle that  coveys the people’s world view.