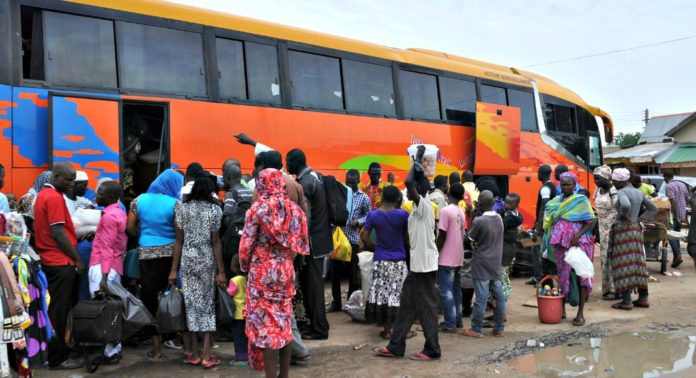 Every year, when people of Igbo extraction troop home en masse from all parts of Nigeria and other countries, others wonder what pulls them to embark on this annual ritual in spite of the high cost and discomfort associated with the journey. Must the Igbo travel home during the Christmas-New Year period? If they don’t travel, will anything happen to them? What exactly do they go home to do that cannot be postponed? What is special about their towns and villages that makes it almost compulsory that they will return to them during the Yuletide?

Christmas is annual Christian celebration that happens on the 25th of December to mark December to mark the purported birth of Jesus Christ. Igbo people, predominantly Christians are used to celebrating it in a big way and with their extended families. The celebration begins a few weeks before Christmas when Ndigbo living outside their traditional Igbo land begin their homecoming while those at home prepare to welcome them.

From December 20 this year to January 5, 2019, all flights going from Lagos and Abuja to Enugu; Owerri and Asaba are sold out. All buses moving to the South-East from key Nigerian cities are fully booked even though fares are doubled. Most buses plying the Southeastern routes don’t wait to pick up passengers from the South-East to Lagos or Abuja: They simply do what they call ‘turn back’ by returning to Lagos or Abuja that same day, so as to be able to move passengers down to Igboland the next day. So, the passenger is paying for himself and the passenger that would have been picked up from the South-East if the bus had waited the next day to pick up passengers.

But the Igbo do not return to their ancestral homes annually just because it is Christmas time. The period between December 5 and January 5 is seen by most Igbo as a period of rest after the toiling and exertion of the year. The Igbo businessmen usually don’t have any leave all through the year. They work six days (or even seven days) of the week. So, by the end of the year, they travel to the land of their birth to rest. To ensure that this is done, many of the markets controlled by the Igbo within Igboland or outside Igboland are shut down between December 23 and January 2, so that those who sell in them can forcefully rest.

Secondly, the Igbo are the ethnic group with the highest number of indigenes outside their communities. There is a strong belief among the Igbo that a person’s financial and professional breakthrough is better achieved outside the person’s community. The thinking is that there is a service one can offer in a foreign land better than the locals. So people relocate from their villages and towns to Onitsha, Aba, Nnewi, Enugu, Owerri, Asaba, Abakaliki, or relocate to other regions within Nigeria or other countries. Easter is only a weekend. Christmas and New Year are one week apart.

The days before and after them form a period of about two weeks, which is the longest period of break available for people who have been away from home for a while to return and spend some time with their family members and childhood friends. It is the period during which the boys who left home to become apprentices are settled after serving their masters for about seven years. Those who live outside their communities also bring their children home to know their kith and kin and learn their dialect. It is also a period for people to meet their potential husbands and wives.

But most importantly, because it is the period when the highest number of people is available within each extended family unit called the umunna as well as the village, annual general meetings are fixed. These AGMs, while serving as avenues for kinsmen to meet, also serve as opportunities to kick-start communal projects or raise funds for them. These projects include road construction, electrification, pipe-borne water, community halls, scholarship scheme, etc. A person who does not participate in such projects is seen as an outsider in such a community, for the essence of the toiling in different parts of the world is for one to make enough money to take care of one’s family and add value to one’s community. It is also time to raise funds for church projects.

On Christmas eve and Christmas day, the normal thing is going to church for Christmas thanksgiving. It’s very important and marks the sort of official Christmas celebration. Christians have to prepare for the mass or service. After church, people also stay behind for a while to greet friends or make new friends before heading home for more celebration. On the D-day or before the d-day, there is a massive slaughter of animals such as chickens, goats and cows at family homes which are mostly extended families and there is a lot of cooking. Cooks may be hired or the family may decide to cook themselves. There may also be a family meeting to begin the day and this is normally done in the obi with the head of the family leading first with a prayer using kola nut and hot drink.

After Christmas day, people who have just returned home would love to take a trip around the village in their cars just to see what they’ve missed. They may go to visit other relatives, town hall and other public places in their home land. They may also walk into the woods to spend a bit of time with nature, breathing the fresh air and watching animals if any.

In addition, the homecoming is also the period for the highest number of social events, especially marriages, housewarming, birthday celebrations, football competitions and even funeral ceremonies of elderly relatives. In some communities, funerals are not allowed in December (which is seen as a period of celebration) – such funerals are fixed early in the New Year, so that those who returned for the holiday can participate in them before returning to their places of residence.

It is also a period for charity, communal feasts, and display of wealth. People display their best cars and clothes. The well-to-do move around in convoys with police escorts and siren. People give bags of rice, clothes, goats, and chickens to others. Cows are slaughtered within families, with the meat shared by members of the family. Those who do such are called Ogbuefi. People practically beg others to come to their homes to eat and drink and make merry, because it is a period of sharing.

For children, it is the best time of the year. Even though they have access to exciting games and places of interest in the city where they live, their ancestral home is the place of freedom. Unlike in the city where they are restrained within their apartment or compound, with nobody to play with except their siblings, home is where they run around, go to church on foot, play football on the street or village square, visit their cousins and neighbours at will and ask them to ‘gbaram Christmas’ which means to offer them a Christmas gift and in this case, it’s mostly a cash offering. In most families, the best way to get children to do chores and behave well once Christmas is near is to tell them that the Christmas trip will be cancelled. And the nightmare of many parents is to tell their children early in January that it is time to return to their place of residence, for most little children start crying once that is said.

The Christmas homecoming by the Igbo consumes a lot of money but many people are happy to spend that money, because of the joy that comes with being with one’s kinsmen and spending time together. Any year one cannot come because of financial constraint or other engagement, one feels very sad. No matter the amount of fun one has in any part of the world outside Igboland, one feels a sense of loss if not spending time with one’s kinsmen at home at that period. Many people start setting money aside for it from January. And even though they feel that so much money has been spent at home, many feel that it is money well spent. And many look forward to the next homecoming.

In the final analysis, only an Igbo person can fully understand why the Igbo passionately travel home en masse during the Christmas-New Year holiday. It is the same way only an Igbo can understand why the Igbo have to go through much trouble to take the corpse of their kinsman from any part of the world to be buried at home. There is an indescribable bond between the Igbo and their ancestral homes.