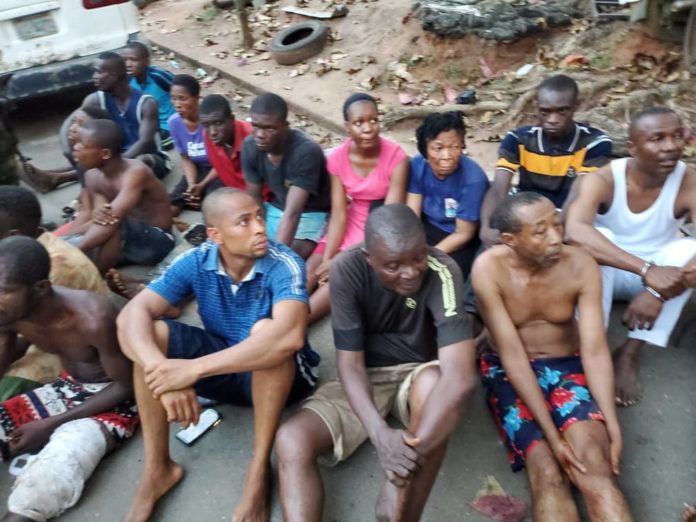 The 82nd division of the Nigerian army, yesterday announced that it has arrested 20 suspected members of the proscribed Indigenous People of Biafra (IPOB), and handed them over to the Nigerian Police Force. The list is made up of 16 men and four women

Deputy Director, Army Public Relations, Aliyu Yusuf, revealed this when he gave an update on raids against IPOB members, whose activities had since been proscribed by the Federal Government.

Nigerian Army has been raiding bushes and forests in the Orlu Local Government Area of Imo State in search of the camp of Eastern Security Network, a local security network recently set up by the Nnamdi Kanu-led IPOB group.

Yusuf said: ‘Through its unreasonable demand for secession, IPOB has continued to interrupt on the security situation in 34 Brigade Area of responsibility.
‘The activities of the threat elements have led to an increase in organised crimes such as armed robbery, kidnapping and other sundry criminal violent acts.
‘Recently, there have been various attacks on civilians, police and military personnel on checkpoints and escort duty.

Read Also: Air Strikes: ‘They Have Finally Brought The War Upon Us’ – IPOB

‘It is as a result of the activities of these criminal elements that appropriate superior authority directed the conduct of aggressive patrol within the general area to safeguard lives and property of law-abiding citizens.’

On when the raid against the proscribed group began and what prompted it, he said: ‘On Thursday, January 7, following incessant robbery and killing of civilians and security operatives by suspected IPOB militia within Orlu senatorial zone, troops of 34 brigade were deployed in Orlu and its environs to commence effective patrol and dominance of the general area to forestall IPOB activities.

‘On January 7 troops from Nigerian Army in conjunction with Nigeria Police conducted a raid operation of a suspected hideout of the armed group in Umutanze community in Orlu council.

‘An SUV Lexus 330 with registration number Lagos, KRD 320 EY, was intercepted with five occupants, suspected to be IPOB members. On sighting the troops, the occupants absconded, however, one Freedom Nwachukwu was arrested and handed over to the police for further interrogation.

‘On January 22, troops of 34 Brigade in conjunction with the Imo State Police Command carried out raids in Okporo/Ezenta and Akata axis of Orlu council to recover a corpse of police officer killed by IPOB member.

‘During the raid, one IPOB member was killed and one Jeep recovered. Various IPOB training camp was discovered and destroyed.

‘IPOB militia attacked own troops and during the encounter, four escort soldiers were killed and four AK47 got missing. One Hilux van was recovered.

‘In a similar development, on February 17, based on accurate intelligence reports, raid operation was conducted in the forest close to Lilu village in Ihiala general area of Anambra State by combined troops of Nigerian Army, Air Force and the Police.

‘The operation commenced with air strike at about 171750A February 21 from Mi-35 Combat Helicopter on confirmation of the IPOB camp/hideout, while ground troops engaged the escaping IPOB criminals.

‘Thereafter, troops exploited further into the IPOB camp. The militias were suspected to have escaped with their dead and varying degrees of gunshot injured members, taking advantage of the poor visibility during the preceding operation.

‘Items recovered were handed over to the police headquarters, Owerri for further necessary action.‘ He concluded.

Tension As IPOB Members Are Gunned Down By Soldiers In Abia