Home Politics Air Strikes: 'They Have Finally Brought The War Upon Us' - IPOB
Politics

Air Strikes: ‘They Have Finally Brought The War Upon Us’ – IPOB 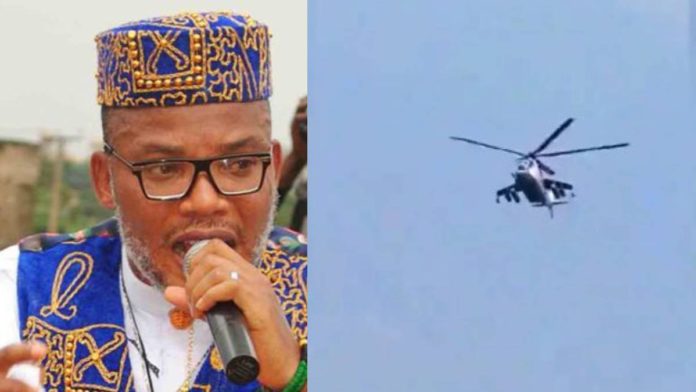 The Indigenous People of Biafra (IPOB) has reacted to the air operations on camps believed to have been occupied by the Eastern Security Network (ESN) by the Nigerian military in Imo State instructing Biafrans to brace up for what is to come.

The Thursday operations reportedly sent residents of Orlu and Orsu local government areas of Imo State scampering for safety as they panicked.

However reacting to the airstrikes, IPOB in a statement made available to Eastern Updates said the Federal Government of Nigeria has brought war upon the Biafran people and IPOB would all it can to defend itself.

The statement which was signed by Mazi Chika Edoziem, the Head of Directorate of State of the Indigenous People of Biafra (IPOB) read; ‘The Nigerian government through its military has finally declared open confrontation with the Biafran people in their bid to harass, intimidate and cow us into submission to relinquish our ancestral lands to foreign Fulani terrorists.

‘IPOB worldwide must gird their loins and be prepared for the long drawn out battle ahead.

‘The leadership of the Indigenous People Of Biafra makes bold to state unequivocally that there shall be no inch of Biåfran land (Biåfran territory) to be ceded to the Fulani Marauders from the Sahel.

‘The Nigerian army has thrown the gauntlet and we the Indigenous People Of Biafra Shall accept their challenge because there will neither be retreat nor surrender on this our journey to liberty and freedom.

‘Now that the Nigerian government has activated its final solution to the Biåfran question with Helicopter gunships in Orlu, they have crossed the line of no return and for us the Indigenous People of Biafra there is only one option that is open for us.

‘Every IPOB family member should be very conscious of the time we have entered and exhibit the highest level of discipline and be ready to follow every directive as will be issued by Onyendu Mazi Nnamdi Kanu.’ It concluded.

We had earlier reported that Nigerian forces had on Thursday conducted air operations in search for the ESN fighters whom they believed were lurking around the bushed and forests in Orlu, Imo State.

A member of the panel of inquiry that investigated allegations of Embezzlements and looting pertaining to the Owelle Rochas Okorocha-led administration has revealed that...
Read more