HomeFeaturesWhy I Killed My Wife And Child - Evangelist Obijofa
Features

Why I Killed My Wife And Child – Evangelist Obijofa 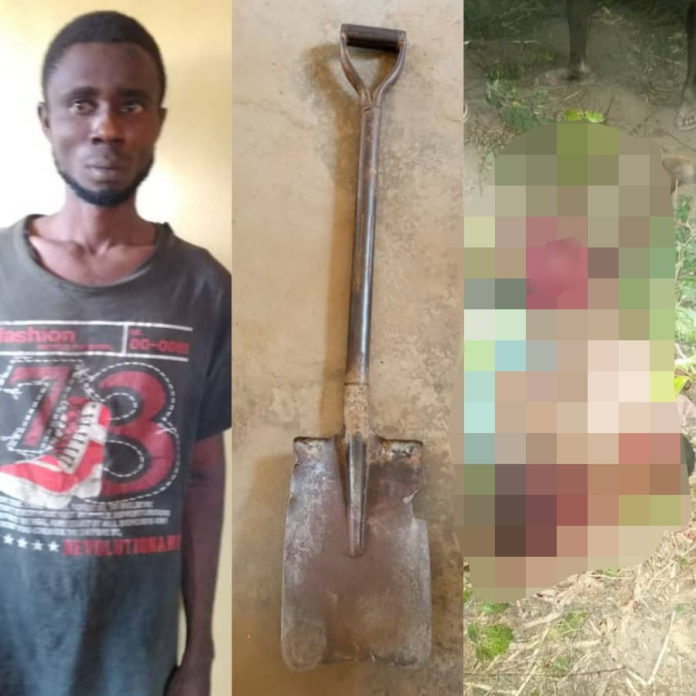 Chukwuemeka Obijofa, a 28-year-old man who claimed to be an ordained evangelist has explained why he killed his wife and 4-year-old son with a shovel in Ofufe Nza village in Ekwusigo Local Government Area of Anambra State.

Upon being paraded before newsmen on Saturday, February 6 at the Police headquarters in Amawbia, together with other suspects, the suspect confessed to killing his wife and son after he found out that she’s been cheating on him for long.

Obijofa said; ‘I opened my eyes in the police station and found out that I’m responsible for killing my wife and my son. I killed her out of anger after I found out that she’s been cheating on me for long. I didn’t believe it because of the level of love and trust I have for her.

‘I came back from work and found out that the food they have was not enough for them. I stepped out to collect money from a client so I can get something for them.

‘But when I came back later, I discovered she wasn’t alone at home. She was with two men that I don’t know. When I tried to enquire who they were, she asked me to keep quiet that she would explain later. She later took me to the room for explanations.

‘Before I could come out, the guys have left without informing us. I became angrier. My wife was trying to calm me down but I couldn’t bear it due to the level of love and trust I have for her.’

Further recounting how he lived peacefully with his late wife for five years, the suspect said the Indian hemp he took shortly after to pacify his anger, triggered it instead.

Obijofa added; ‘As I was about to leave, I told her that I’m leaving the house for her and her boyfriends who she’s preferred and more comfortable with.

‘I went straight to where I took some hemp to calm myself and feel relieved. But unexpectedly, I found out that the hemp even made it worse that I lost my conscience. I couldn’t behave like a human being again.

‘It became obvious to me that another demon or extraordinary spirit has possessed me. Besides, nobody was around to control me. I didn’t know what else that happened till I opened my eyes to find out that I’ve killed my wife.

‘I was ordained in 2012 as an evangelist. If I pray, it comes to pass. But when I began to fall out from God’s mercy, my pastor warned me that a day is coming when I’ll face the consequences. He said his God didn’t want me to pay the supreme price.

‘But I couldn’t believe it until today I’m giving this message to those it has not happened to. Please, whatever government declared contraband, especially hard drugs, please steer clear from them. It has a way of impacting another spirit in you.’ He concluded.