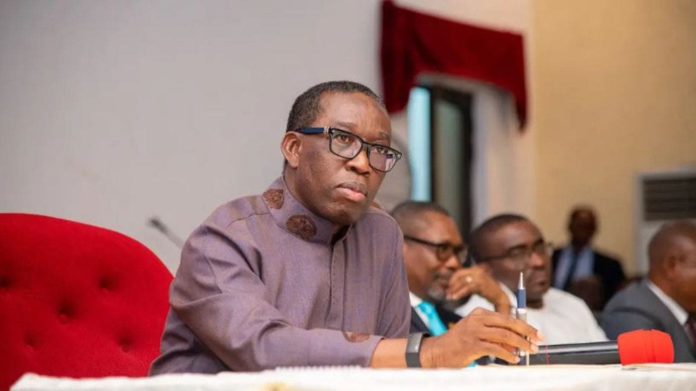 The Anioma Youth Forum Worldwide (AYF-W) has commiserated with Governor Ifeanyi Okowa of Delta State and other members of his family over the death of their father, Pa. Okorie Arthur Okowa who passed on at the age of 88.

AYF-W in a statement by its publicity secretary, Elvis Ekwukwo, stated that youths of Anioma nation (Delta north senatorial district) were shocked when the news of the demise of the octogenarian and Okpara-Uku of Owa-Alero, filtered in.

‘We join other Deltans, friends, and associates of the first family to commiserate with our governor, Senator Ifeanyi Okowa as we urge him to take solace knowing that his late Dad lived a fulfilled life and has only gone to rest having fulfilled his mission on earth,’ Ekwukwo stated.

Also, the federal commissioner representing Delta State on the board of Revenue Mobilization Allocation and Fiscal Commission (RMFAC), Andrew Agbaga, described the late community leader as a refined father, a teacher, and lover of God who at all cost lived in peace with all men and craved for a more united Delta.

‘I wholeheartedly sympathize with the family of my dear governor, Dr. Ifeanyi Okowa and the entire good people of Owa-Alero in Ika North East over the transition of a refined icon to eternal realms

‘I urge the Okowa family and the people of Owa-Alero Kingdom to accept my condolences and to take solace in the fact that our father has gone to rest with the Lord,’ Agbaga stated.

On his part, an elder statesman, Hyacinth Enuha, said the late patriarch of the Okowa household was a lover of his people and an astute believer of unity and fairness.

Enuha in a statement by his media aide, Nnamdi Ofonye, noted that Pa. Okowa would be greatly missed by many.

He added that while the state grief, ‘we lack the powers to question the wish and will of God in our lives and asked God to grant the bereaved the fortitude to bear the irreparable loss.

Facebook
Twitter
WhatsApp
Email
Telegram
Previous articleChidi Ibeh Dares Obiozor: ‘No One Has Right To Prosecute Me’
Next article3 Die In Accident On Port Harcourt-Ebonyi Road