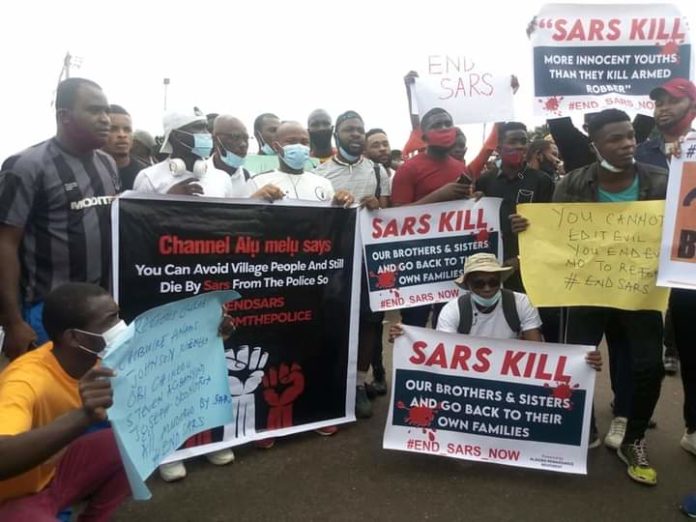 Hundreds of youths in Awka, Anambra State capital, on Saturday joined the #ENDSARS protest that has rocked the country.

The youth who bore various placards, matched around major roads in the state to press home their demand for the scrapping of the Special Anti Robbery Squad (SARS) department of the Nigerian Police.

The SARS office in Anambra is said to be one of the most notorious in the country with countless allegations of extra-judicial killings levelled against them.

The youth converged at the Alex Ekwueme Square as early as 9 a.m. for the peaceful match.

One of the protesters, Mark Okwuchukwu, told PREMIUM TIMES that the protest was peaceful without any molestation from law enforcement agents.

He said the protesters matched round major roads and streets in the city and touched major landmarks like the Amawbia junction, Eke Awka Market, Unizik, flyovers all within the Enugu- Onitsha road axis and back to Ekwueme square where they dispersed.

Mr Okwuchukwu commended the youth for coming out en masse to join the protest, describing the crowd as staggering.

He also urged the federal government and the political class to listen to the yearnings of the people, warning that the masses are becoming more politically aware.

“Nigerian politicians are in trouble. The young people are becoming increasingly ready to ask questions and challenge authority.

This is the second of such protests in the South-east. The #EndSARS protest held in Imo days ago.