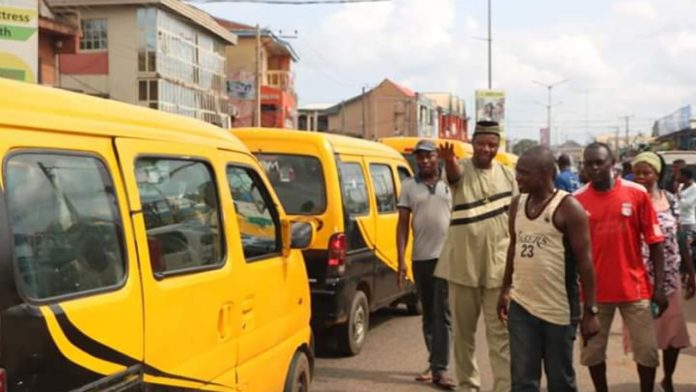 A university graduate, Jude offor, says he went into intra-city commuter bus transport operation after years of searching for a white-collar job without success.

Offor disclosed that he had no money to purchase his own vehicle but was able to convince a principal who gave him the bus on hire purchase and that he was confident that all things being equal, he would be able to pay the agreed sum and become an owner-operator.

But against his expectation, he has not been able to realise his dream because apart from the cost of maintenance and other hindrances, his major challenge is the amount of money he parts with daily as government revenue and union dues.

A commercial driver on the Enugu-Onitsha inter-state route, who simply identified himself as Odinaka, says he pays between ₦900 and ₦1,500 daily on government levies.

Odinaka adds that drivers paid as much as N300 at Awka and Awkuzu junctions respectively and ₦100 at every bus stop, noting that it was subject to increase depending on the fares charged.

According to him, after paying at Awka, we still pay at Awkuzu compulsorily without picking up passengers; the number of touts selling tickets are many that we pay as much as N1,500 every day.

These are some of the everyday stories of transport operators in Anambra; they complain of paying so much to the government through multiple channels managed by touts who represent different unions.

This has been blamed on the absence of organised public transport management system were nationally and constitutionally, approved bodies like Road Transport Employers Association of Nigeria (RTEAN) are not allowed to operate.

The association which has been given written approval by the Federal Ministry of Transport to commence work since 2019 has been frustrated, allegedly by some cabals within and outside the government who are benefiting from the system.

The letter which was signed by A.O. Falonipe, Registrar of Trade Unions in the Federal Ministry of Transport, decried the non-recognition of RTEAN, Anambra Chapter by the state government and their inability to carry out its legitimate operations in the state.

It says the ministry had written the governor in September 2015 wherein he was duly informed of the status of RTEAN as a duly registered trade union in the transport industry.

“The ministry further requests that you should be granted the required recognition to carry out your legitimate trade union activities.

“The Federal Ministry of Labour and Employment reiterates that the status of RTEAN remains unchanged, and therefore, the Government of Anambra State should grant you the required recognition to carry out your lawful operations within the state,” the letter to the state RTEAN states.

Strangely, the public transport sector in the state is being managed by a plethora of drivers welfare unions, purportedly registered by the Corporate Affairs Commission and approved by the state government which engaged in various forms of ticketing and branding of vehicles.

The question on the lips of many is whether all the money collected is paid into Anambra Government coffers or are they are going into private pockets?

Many people are of the opinion that with the number of commercial bus and tricycle transport operators in Anambra, the state will be the most buoyant in the country if the revenues were maximised, but expressed worry that few people are enjoying it while remitting pittance to the government.

Dr Christian Madubuko, immediate past Commissioner for Transport in Anambra under whose tenure touts and illegal toll collectors were arrested in January 2020, says the state is aware that some members of a strong cabal are using the state as a cash cow.

Madubuko says the state’s revenue was dwindling and that it has been discovered that those responsible for the sabotage in the sector are mostly people from other states, adding that arresting the boys is a step forward in getting to their bosses.

“We are assuring customers and drivers from outside the state who are being harassed to continue coming to the state to do their businesses that the coast is clear, we will leave no stone unturned in sanitising Anambra State, particularly Onitsha of touts who are terrorising you.

“Feel free to come to the state to do your business, we are working with security agents to rid the state of these miscreants, who are terrorising you, we must encourage those who are coming to the state to invest.

“We must continue this exercise, touts must leave the state, people must be free to do their businesses, we cannot be discouraged by anybody, so, Nigerians coming to do business in Anambra State, particularly Onitsha should feel free to come,” he said

These threats and assurances notwithstanding, the public transport sector and motor parks management orderly. This why stakeholders are expressing concerns and calling for a more organised system in the interest of the greater majority.

Chief Rommy Ezeonwuka, a Chieftain of the All Progressives Grand Alliance (APGA), says there is need to sanitise the commercial transport management in Anambra as it is obvious that some vested interest is shortchanging the state.

Ezeonwuka says few people are taking advantage of the good heart of Gov. Willie to collect revenues from transporters on behalf of the government in name of union and appropriate same to themselves.

The APGA chieftain, who is also a Special Adviser to Obiano on Security, notes that all efforts to rid the state of touts have proved abortive as the cabal is so strong that when the boys are arrested, they find their ways back to the streets in the next few days.

He, therefore, suggests that those in charge should be stripped of the authority they purportedly got from the government and flushed out.

“The problem is that the state is losing revenue and our businesses are suffering because customers and drivers from outside the state are not willing to come here as a result of high touting activities of the revenue agents.

“This is not the case in other states, people who manage parks in most parts of the federation have not been allowed to operate here and that is why some of our neighbouring states with more organised system get more revenue.

“It is time the elders and people like me speak out about these things, the government should allow the recognised unions to come in and work so that the state can get its due.

“Touting is also a major contributor to insecurity because they not only sell tickets, they also engage in small crimes because they are not accountable to anybody and enjoy the backing of these rich men cabals,” he said.

Mr Kingsley Maduagwuna, Chairman of RTEAN, Anambra chapter, says the union is on the ground in the state with structures in all the local government areas and motor parks across the state and is ready to help the state enjoy the full benefit of the transport sector.

Maduagwuna says there is neither faction nor order stopping RTEAN from going to the field, rather some people who were benefiting from the inefficiency of the park management system are suppressing the union in spite of the approval it has to operate.

He says the union operates in the interest of the government and that its operational modalities guarantee a safe environment for all users of motor parks.

“RTEAN is a transport trade union recognised by the Constitution of the Federal Republic of Nigeria to help the government manage motor parks across the country, and we are here to help Anambra Government to sanitise the sector and get their due revenue.

“RTEAN is the economic promoter of any state and we have a network that is effective, we coordinate our activities in a sophisticated manner, we have just one ticket and it covers you anywhere in the state all the day.

“So, we don’t just make money for the government, we protect the operators from extortion; drivers in Anambra are passing through difficulties and they are waiting for RTEAN to come to their rescue,” he said.

In January this year, no fewer than 35 touts who sold tickets within Onitsha metropolis were arrested by Focused Initiative Against Touting, a special task force set up by the Anambra Ministry of Transport.

The situation in Anambra has also attracted the attention of the national leadership of RTEAN which expressed dismay that the government has not seen the reasons and immense benefits why the union should operate.

Alhaji Mohammed Dishara, National Vice-President of RTEAN in charge of Administration, says the situation could be due to a breakdown in communication which has been addressed or they are being frustrated by strong forces acting for personal interest against the state.

Dishara adds that the leadership of Anambra chapter is duly constituted and deeply rooted while calling on the state government to borrow a leaf from other states and the Federal Capital Territory and allow RTEAN carry out its constitutionally assigned role of transport management.

He says the association has absolute control and authority subject to the laws and bye-laws of the land overall motor park activities throughout Nigeria to facilitate orderliness and ensure complete welfare of passengers and safety of luggage.

“RTEAN doesn’t encourage touting and hooliganism, rather we work toward their elimination in all motor parks; these are some of the laws guiding our operations.”

However, efforts to get the reaction of Mr Afam Mbanefo, the current transport commissioner in the state were not successful, as he did not answer telephone calls put through to him and when visited, he said he was not available for such a discussion because he had a busy day.

From the foregoing, it is evident that a strong political will is needed to effect the desired change in the sector, and if vigorously pursued, Anambra will be better for it in terms of improved fiscal robustness, especially as economies are coming out of COVID-19 pandemic induced setback.