One Dead As Truck Rams Into Bus In Anambra 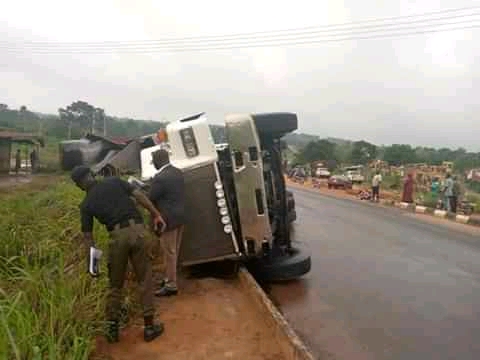 One person has been confirmed dead while four others were seriously injured in an accident involving a truck and a bus along Asaba-Onitsha Expressway on Friday.

The Anambra State Sector Commander of the Federal Road Safety Corps, FRSC, Mr Andrew Kumapayi, confirmed the incident to newsmen, adding that the accident occurred at about 6pm.

Kumapayi said the unfortunate incident was caused by a brake failure and loss of control.

According to him, one person died in the mishap, while four male adults sustained injuries.

‘According to eyewitness the brake of the truck failed and the driver lost control of the truck.’

‘It rammed into a bus, which landed into the nearby drain where it fatally hit and killed a pedestrian.’

‘Four passengers in the bus also sustained some degree of injuries.’

‘The victims were taken to Toronto Hospital, Onitsha and the body of the dead was deposited at the hospital morgue,’ he said.

Kumapayi said the driver of the truck had been handed over to the police for further investigation.

He condoled with the family of the dead while advising motorists to always inspect their vehicles before embarking on road trips.