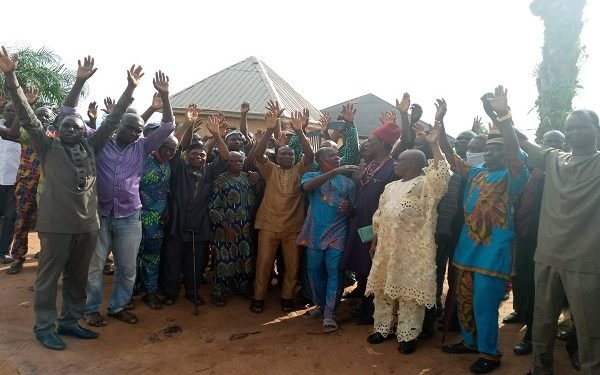 Indigenes of Agbaja community, Abatete in Idemili North Local Government Area of Anambra have protested alleged imposition of leadership on the community.

The protesters, under the umbrella of Agbaja Abatete Community Association (AACA), also alleged threats to their lives by certain influential persons in the town reportedly hell bent on replacing the existing administration with an unpopular government.

They appealed to Governor Willie Obiano to call those concerned to order to forestall any break down of law in the community.

Addressing newsmen on Friday after a meeting with the Police, President of the body, Prof. Ikechukwu Okudo, accused the Traditional Prime Minister of the community, Chief Pius Ezeigwe, of single handedly setting up a caretaker committee without regards to the constitution after claiming dissolution of his administration.

He said despite rejection of the said committee by majority of AACA members, President General of the community, Chief Moses Chukwuka and Secretary General, Bar. Silvester Ikpema went ahead to swear in the committee even when there was no vacancy.

He said the committee wrote a petition to the Police alleging threat to lives, breach of community peace and plot to conduct election.

Okodo said: “I’ve been President since 3 years until we decided to hold a general election which COVID-19 stopped us from holding.

“But in July 5, I convened a meeting where the association extended my tenure for one month till August 2 to enable us hold the election.

“When we convened a general meeting to think of way forward after realising we can’t still hold the election as a result of the ban on elections by government, we discovered that the venue has been sealed by the police and some members of Abatete Vigilante Group to disperse us.

“But one of us, Chief Basil Mbanefo, who was among those ignorant of our decision to shift the meeting and went to the venue was arrested and was brought to the Area Command, Ogidi.

“We came and saw to his bail. They brought out a petition saying that more ten of us were being waited for. That’s why we’re here today in order to answer them. Members of the caretaker committee were also invited.”

Okudo however said the Police discovered their claims of threats to lives, community peace breach and planning an election were false after his group proved the committee was unconstitutional.

He added: “Area Commander asked us to come back on Tuesday next week so that certain relevant persons can be in attendance, including Chief Pius Ezeigwe and the PG, Chief Moses Chukwuka.

“We appeal to concerned authorities to call the Igwe to order. He should be made to behave himself. We are peaceful people, we’re not violent. You can see the elderly men among us.”

When journalists approached the Secretary to the Caretaker committee, Chief (Sir) Cyprian Iloegbunam for his reaction to the allegations, he simply said: “We’re not disposed to speak to you.”

Traditional Prime Minister of the town, Chief Ezeigwe when contacted for reaction, referred the reporter to the PG, Mr. Moses Chukwuka, who did not take his calls nor respond to text messages.

Police spokesperson, Haruna Mohammed, said the case was being investigated.