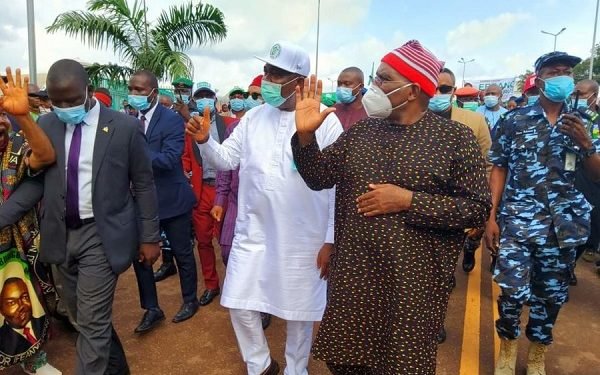 Last week’s reunion of the Ebeano political family has continued to resonate in the nation’s political space. For critical observers, the Ebeano concept and the Gburugburu philosophy are one and the same. That was why in Enugu particularly, the euphoria of the reunion of the Ebeano family was remarkable as the nostalgic event brought together serving and former members of the National Assembly, State House of Assembly, former ministers, party leaders and others produced by the Peoples Democratic Party (PDP) in the state since 1999.

Since inception of the Fourth Republic, virtually all the major players in the politics of Enugu State are products of the Ebeano family. Governor Ifeanyi Ugwuanyi, former Governor Sullivan Chime, former Deputy Senate President, Ike Ekweremadu, former Senators, House of Representatives members, among others, who have occupied several other high profile political positions are products of the family which was birthed by former Governor Chimaroke Nnamani.

But what is the whole concept of Ebeano about?

It is a political philosophy for good governance, courage, political sagacity, hard work and industry, and of course, humility. Above all, the philosophy encourages orderliness and peaceful coexistence of the people; hence, it is rooted in power rotation among the three senatorial zones in the state. The power rotation which started with Enugu East in 1999 and currently being held by Enugu North will have gone round the three zones in 2023 and as it is, an average Enugu person knows that Enugu East will produce Governor Ugwuanyi’s successor. That is why, perhaps, no state in Nigeria has witnessed the smooth transition of power like Enugu because of that political culture of fairness, justice and equity that has been entrenched in the Coal city state.

It was then not surprising that thousands of jubilant members and supporters of the family last week celebrated the reunion of the Ebeano family which paid a solidarity visit to Governor Ugwuanyi.

In the event, the family unanimously endorsed him as their leader in whom they are well pleased.

Led by former Governor Chimaroke Nnamani, the family described Ugwuanyi as an unassuming, peace-loving, visionary and worthy leader who has kept the vision and philosophy of the movement alive and pledged their unalloyed loyalty and support to the governor in his choice of a political successor.

The Ebeano family maintained that Ugwuanyi deserves the same political privileges enjoyed by his predecessors in choosing their successors as well as other positions.

The solidarity of the political family for Ugwuanyi did not come to many as a surprise because Gburugburu has not only consolidated the Ebeano philosophy but has substantially improved it to an enviable height.

Many argue that perhaps, marrying his unique personal leadership attributes with the Ebeano philosophy is what has made Ugwuanyi to continue to rise politically from strength to strength. And ironically, he is one politician that opponents can easily underrate because he is a man of few words. But those who understand his leadership style would tell you he is a man of action and always passionate about his convictions.

In 2003 when he was elected to represent Igboeze North/Udenu Federal Constituency of Enugu State, nobody gave him a chance to stay beyond a tenure but he was in the House of Representatives for 12 years. At the Green chamber, he was the Chairman of the Committee on Marine Transport and in the history of Nigeria, the only lawmaker who served two consecutive tenures as Chairman of that critical committee.

And it did not stop at the House of Representatives. Following his party’s primary election of December 8, 2014 in Enugu, Ugwuanyi successfully won PDP’s gubernatorial ticket, which legitimately made him the state’s PDP standard bearer for the 2015 general election. Of course, he predictably won the election. At that point, he caught the fancy of many who did not understand the secret behind his rise in politics.

But critical watchers would readily tell you that the ‘Gburugburu’ political philosophy is the secret behind the governor’s meteoric rise in power. The argument is that any politician who adopts the philosophy in his relationship with the people is bound to win their hearts.

He is one person whose kindness and generosity radiate “everywhere” and on “everyone”. As an intelligent leader, he is interested in results and his leadership qualities have triggered socio-economic developments and impacted positively on the people of Enugu State.

But three things are key to the Gburuguru philosophy. One is humility which the governor has in abundance and oftentimes uses it to great advantage. Many would agree that even his worst political opponents find it difficult if not impossible to challenge his government. He is ever ready to meet even his opponents at their own terms for peace to reign provided it is for the good of the people.

Many believe the governor’s level headedness, transparency and disposition to carry everybody along have made it impossible for the opposition parties to challenge his administration. Even though some prominent indigenes of the state have joined the APC, which is the main opposition party in the state, they still maintain a cordial relationship with the governor who believes that the interest of Enugu people should not be limited by party affiliations.

One of the great thinkers of our time, Jonathan Edwards says: “Some persons are always ready to level those above them down to themselves, while they are never willing to level those below them up to their own position. But he that is under the influence of true humility will avoid both these extremes. On the one hand, he will be willing that all should rise just so far as their diligence and worth of character entitle them to; and on the other hand, he will be willing that his superiors should be known and acknowledged in their place, and have rendered to them all the honors that are their due.”

One thing that is also embedded in the Gburugburu philosophy is the spirit of generosity. What it means is that for one to succeed in politics, one must, as a rule, be ready to sacrifice to others and think less of self. Leadership in the eyes of the governor is about people. Remember, the people in this context who are in the majority are not fools and the goodwill cultivated by the generous politician comes in handy during elections.

Ugwuanyi’s sense of accommodation is unparalleled. Every leader must have a large heart and be ready to sacrifice anything for the good of all. For instance, the office of the governor is not for a particular zone in the state but for all irrespective of political affiliations. It is not surprising that Governor Ugwuanyi is adored by all in the state because he has given everybody a sense of belonging.

With the entrenchment of peace and good governance in Enugu State, in spite of the country’s daunting economic challenges, Ugwuanyi has sustained his path to vision, integrity, inclusiveness, accountability, transparency and prudent management of resources. And his exploits in the provision of critical infrastructure across the state, rural development, qualitative and affordable education and healthcare delivery, regular payment of workers’ salaries and pensions, and robust investment drive, peace and security; economic empowerment and agricultural revolution, among others, have been acknowledged and applauded by friends and foes alike.