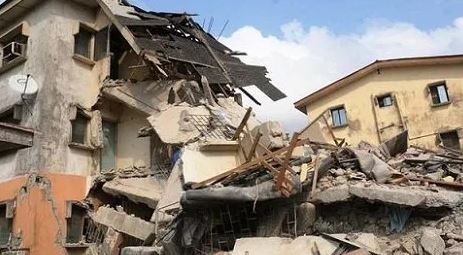 A nursing mother has been pronounced dead, while her six-month-old baby was rescued alive from the rubble of a collapsed building in Obosi, near Onitsha, Anambra State, on Sunday.

Many are suspected to be trapped under the rubble, while some were rescued with varying degrees of injury.

The name of the deceased could not be ascertained as of press time.

An eyewitness told our correspondent that the one-storey building collapsed around 4pm, killing the woman instantly, while several others sustained varying degrees of injury.

‘We still suspect that many are trapped in the rubble. The woman died instantly, while her baby was rescued alive,’ the eyewitness said.

The Police Public Relations Officer in the state, Haruna Mohammed, confirmed the incident.

He said the corpse of the deceased had been deposited in a morgue, while investigation was ongoing to ascertain the cause of the collapse.

Mohammed said the site had been cordoned off by the police and other security agencies, while efforts were ongoing to rescue other victims believed to have been trapped inside the building.

He said, ‘On Sunday, a one-storey building suddenly collapsed at Umuota village, Obosi town, in the Idemili North LGA of Anambra State.’

‘The scene was visited and cordoned off by policemen attached to the Obosi Division and other security agencies in order to prevent hoodlums from taking advantage to loot, while effort is ongoing to rescue other victims suspected to have been trapped in the building.’

‘One person, a woman of about 40 years old, whose name has yet to be ascertained, was pronounced dead by a medical doctor and her baby is responding to treatment.’

‘The corpse was deposited in the St. Edward’s Mortuary for preservation. The case is under investigation to ascertain the circumstances surrounding the incident.’