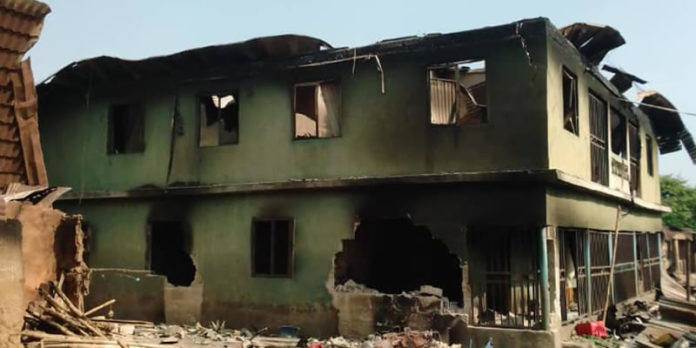 Four persons have been allegedly killed in a communal conflict in Awba Ofemili community in the Awka South Local Government Area of Anambra State.

No fewer than 13 houses were also said to have been destroyed in the mayhem.

Some leaders of the community, led by a former Commissioner for Agriculture in the state, Nnamdi Meko, disclosed this at a press briefing in Awka, the state capital, on Saturday.

The leaders accused the traditional ruler of the area, Igwe Maduagwuna Ezekwesili, of causing the crisis.

Meko said, ‘As we speak, the Awba Ofemili community is desolate. Over 80 per cent of people in the community have fled. They’re in exile. Those abroad have not gone home.’

‘Four persons have been killed, 13 houses were burnt. Others were vandalised. Residents’ properties have been carted away by hoodlums.’

‘The community leaders said the bone of contention was the land between Anambra State and Enugu, which they alleged that Ezekwesili had claimed.’

‘He forcefully grabs people’s land, that of the community and even the church. He sees himself as the owner of the land, harvesting timber and wood which he sells and pockets the proceeds,’ they alleged.

They appealed to the state governor, Willie Obiano, to withdraw the certificate of recognition of the monarch for high-handedness and misconduct, saying that was the only way to return peace to the community.

In his reaction, Ezekwesili, in a telephone interview, described his accusers as “sore losers.”

‘They have a thousand petitions against me to the government and they go to the police to give false information about me.’

The monarch added, ‘The persons they said were killed were killed by them and their agents. I want you to come to my community and I will take you round for you to talk to the people.’

‘The Anambra State Government had set up a panel of investigation and in the end, the panel dismissed their allegations against me because they were frivolous.’

‘Those people are ‘urban gorillas.’ They don’t reside here. Some of them have not slept in this community for the past five years. They operate from outside. My people are with me and they are happy with me.’

‘The bone of contention is that these people collected millions of naira from investors and sold the disputed boundary land to them, but couldn’t deliver the land to the buyers because it’s in dispute; and they want to deceive the investors with all these ‘factory noises’ you hear from them.’

The state Police Public Relations Officer, Haruna Mohammed, said he was not aware of the dispute. ‘I will find out,’ he said.