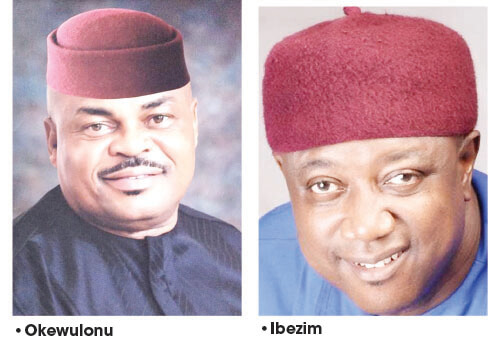 The number of politicians in Okigwe Senatorial District of Imo State, who had positioned themselves to take Senator Benjamin Uwajumogu’s seat at the National Assembly, after his demise, has thinned with the recent election of candidates for the Imo North senatorial bye-election by the two leading political parties.

The All Progressives Congress (APC) elected a former Commissioner in the state, Chief Frank Ibezim as its flag bearer while elder brother to Chief Chris Okewulonu, Chief of Staff to the short-lived Government of ousted Governor Emeka Ihedioha, Chief Emmanuel Okewulonu, emerged the candidate of the Peoples Democratic Party (PDP).

Senator Uwajumogu, a former Speaker of the Imo State House of Assembly had slumped and died on December 18, 2019, and the Independent National Electoral Commission (INEC), has slated the legislative bye-election for October 31, to replace him. A sister to the late senator, Dr. Chidimma Uwajumogu, also participated in the party primaries.

Not a few persons had thought that the APC will adopt the Adeleke’s model in Osun State that produced a result for the PDP during a senatorial rerun, by adopting the late Uwajumogu’s sibling, Chidimma.

However, such permutation petered away last Thursday, when Ibezim, a close ally of Minister of State for Education, Chief Chukwuemeka Nwajiuba, trounced more than nine other contestants to clinch the party’s ticket.

According to the result announced by the Chairman of the party’s election panel, Senator Surajudeen Ajibola Basuiru, Ibezim polled 13,637 votes to defeat his closest rival, Mathew Omegara who polled 2,826 votes.

But there was a twist indicating that the APC might not have a smooth sail in the election proper as some three other contestants currently parade their own results claiming to have won the party primary.

Ararume, a prominent political leader in Okigwe zone, who on the run up to the 2019 general elections, dumped the APC for the All Progressives Grand Alliance (APGA) which he was the governorship candidate eventually secured a waiver from the national leadership of the APC and sought the senatorial ticket.

He was reportedly declared the winner of the APC senatorial primary election last Thursday, in the zone by a member of the party’s election panel, Umar Nguma.

Announcing results of the Ararume version of the exercise at OnuImo civic centre, Umar Gana Nguma, said that Senator Ararume had scored 22,944 votes to defeat his closest rival, Dr. Chidinma Uwajumogu, who they said scored 3,757.

While the confusion raged, the news came that those nine aspirants who took part in the Imo North senatorial primary had congratulated Ibezim, the winner of the election.

Runner up to Ibezim in the said election and former House of Representatives member, Mathew Omegara, on behalf of the aspirants while addressing journalists at the party secretariat in Owerri, vowed to support the winner in the main election.

Omegara disclosed that they took the decision to support Ibezim in the interest of the forthcoming senatorial election in the state.

He said: “Despite that most of us thought we would win but it did not happen like that; we thought about the interest of the party and the governor and we have to put our interests behind.”

Earlier, State Chairman of the party, Chief Marcillinus Nlemigbo stated that the aspirants were able to unite after the election because of the peace that has prevailed in the party, adding that the party still has only one executive in the state which he is the head.

The highly elated Ibezim while acknowledging the show of sportsmanship exhibited by the aspirants vowed to always carry each of them along just as he pleaded that he still needed their support even after he might have achieved victory.

Governor Hope Uzodimma who later received them at the Government House, noted that the bye-election was used to test run the nascent democracy of the state. He expressed happiness that it never disappointed him following the peaceful nature of the election.

He further commended the aspirants for congratulating the candidate, maintaining that their act affirms the growing democracy in the state.

The result which produced Ibezim has since been submitted to the National Secretariat of APC even as three other contestants kicked.

Daily Sun reliably gathered that Sen. Ararume, Sen. Achonu and Uwajumogu, who all have their own results, were already in Abuja, each claiming to be recognised as winner of the APC primary.

A staunch supporter of one of the claimants told our reporter that there were bound to be litigations depending on how the national leadership of the party were able to resolve the matter.

On the side of the PDP, the contention may not be much since it was a straight fight between Ekewulonu and Chief Patrick Ndubueze, the party’s candidate in the zone at the 2019 general election.

Okewulonu secured 609 votes to defeat his only contender in the primary, Ndubueze, who garnered 27 votes.

Chairman, PDP Electoral Committee Panel in the state, Chuba Oramisi, who announced the result, said a total of 659 delegates were accredited for the primary election.

Oramisi noted that while 23 votes were void, 636 were valid.

Prior to the PDP primary, the 2019 senatorial candidate of the party had accused the new leadership of the party led by former Minister of Industry, Chief Charles Ugwu, of clandestine plot to impose another candidate on the people in order to displace him.

He vowed to institute a court action if the party failed to uphold his candidature and went ahead to endorse a new candidate in the repeat of an election originally won by him.

Ndubueze in a press briefing last Friday, advised the party not to toe the path of injustice by imposing a candidate on the people especially now that the party was crying for the prevailing of natural justice.

He alleged that a ‘small cabal’ in the present leadership of the party was hell-bent on stopping his candidature on the claims that he no longer had the financial muscle to run the election.

He said: “My expectation and the expectation of all well-meaning members of the PDP was that I should have been given the ticket to reclaim a mandate freely given to me by the good people of Okigwe zone.

“In 2018, amid idle talks by my detractors that I had been completely skinned by the 2014 primaries and therefore lacked the capacity to run, I won convincingly at the primaries and went ahead to win the main election against a senator who lost to me even in his ward. Unfortunately, the mandate was stolen on account of internal sabotage.

“Now that another opportunity has presented itself for me to reclaim my stolen mandate, why would the party decide to throw me out to impose a neophyte who is neither popular nor acceptable to members of the zone?

“It might interest you to know that of the six LGAs that make up Imo North senatorial district, only Okigwe and Onuimo LGAs are yet to produce a representative of the Senate.

“Make no mistake about it. I have enough financial resources to run the election to a successful end but I refuse to allow myself to be goaded into needless and avoidable competitive primaries, when the mandate freely given to me by the PDP delegates previously still subsists.

“It beats my imagination that the party’s ticket for Okigwe zone has been domiciled in Obowo LGA where the current state chairman of the party, Charles Ugwu, hails from,” he lamented.

He further disclosed that the party’s sole aim to displace him in the election was the reason it failed to conduct the statutory 3-man ad-hoc delegates’ congress in the ward but allegedly compiled names of their cronies for use in the primaries.

However, a press statement by the state PDP Publicity Secretary, Ogubundu Nwadike, stated that the party had slated September 5, for its primaries where two aspirants, Patrick Ndubueze and Emmanuel Okewulonu were to be voted for by statutory and ad-hoc delegates from the 64 electoral wards across Imo North senatorial district.

The foregoing scenario also pointed to another contentious setting as those close to the Ndubueze, the PDP senatorial candidate in 2019, said that he has resolved to challenge the process in the court.

If that happens, just as anticipated in the APC, the candidates of the two parties would sure have enough legal tussles.

Regardless, it is important to have a little insight into the profiles of Chief Emmanuel Enyeribe Okewulonu and his APC counterpart, Chief Frank Ibezim.

His early academic career started in Umuahia, Abia State where he had his primary education. His secondary education was at Community Secondary School, Ikenazizi Obowo, and later transferred to Ibeku High School in Umuahia where he graduated as one of the best students.

He worked briefly as a clerical staff at then Imo State College of Agriculture Umuagwo (now Imo State Polytechnic Umuagwo). He later gained admission into the school and graduated in 1986 with distinction in Higher National Diploma (HND).

Way back as a student, Ikeoha displayed his interest in students’ unionism by contesting and getting elected as Commissioner for Welfare. Because of his outstanding performance and strong political will, he was drafted into the SUG presidential race of the institution where he emerged as the only qualified presidential candidate before the General Ibrahim Babangida’s Government suspended Students Union Government (SUG) activities in 1985.

Okewulonu joined the Nigeria Customs Service after his mandatory National Youth Service Corps (NYSC) programme in 1987 and rose to the rank of an Assistant Superintendent of Customs where he headed some key units as before he voluntarily retired in 1999 to pursue his lifelong dream of a career in private business.

Ibezim has held top public service positions at both the state and federal government levels including serving as the Imo State Commissioner for Agriculture and Natural Resources (2014 – 2015), Special Adviser, (Political) to Minister of State for Education (2015 – 2019), Board Member, Governing Council, Federal College of Education, Gombe, Member of the Federal Government Committee on Assessment of Needs of Unity Schools as well as one-time Managing Director, Imo Poultry Limited where he was credited with revamping the moribund Avutu Poultry, the largest poultry in Sub-Saharan Africa.

He said that his aspiration to represent Okigwe zone in the 9th Senate is about quality representation: “My vision and mission remain to provide competent and compassionate leadership, and to sustain continuity in quality representation, surpassing the democracy dividends ever enjoyed in the zone.”