PDP Set To Bounce Back After Losing Power In Imo 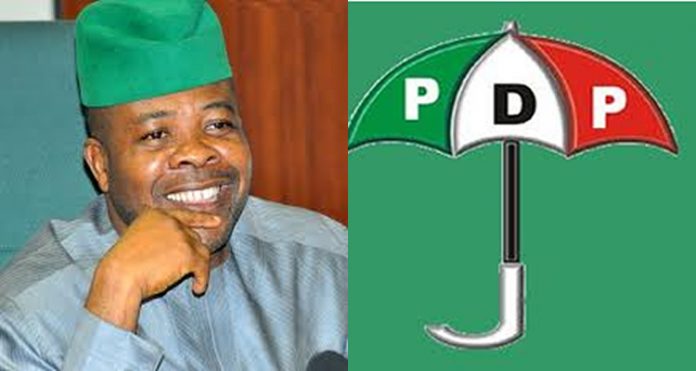 Before the 2019 general elections, precisely the governorship poll, Imo State chapter of the Peoples Democratic Party (PDP) was almost a shadow of itself as most top shots had deserted the party. This was due largely to the dominance of Governor Rochas Okorocha of All Progressives Congress (APC). Okorocha’s oratory and political manipulation helped him gather politicians of disparate hues to his fold, particularly those considered to belong to the political family of ‘Any Government in Power’ (AGIP).

Unfortunately, as the momentum for the 2019 general elections began to gather, Okorocha committed the succession suicide of planning to install his son-law, Mr. Uche Nwosu, which met stiff opposition from various quarters. When it became a fruitless political venture for Okorocha, his allegedly made his son-law to pitch tent with the Action Alliance (AA). Mr. Uche then flew the governorship flag under Action Alliance at the poll, but that was where the ambition of in-laws succeeding each other in Imo ended.

That careless political move by Okorocha’s camp became a plus to PDP in Imo State. The then Deputy Speaker of the House of Representatives, Mr. Emeka Ihedioha, who was the governorship candidate of the party in 2015, but lost to Okorocha, launched back in 2019. Imo people saw him as a rallying point to end whatever political dynasty Okorocah was trying to install in the state, as the people responded to Ihedioha’s call for liberation. An avalanche of politicians and sympathizers, who vehemently opposed Okorocha’s bid to foist his son-law on them, found their way back to PDP.

As a result, Ihedioha, after a frantic and interesting political fight with the then-Senator representing Imo East (Owerri zone) Senatorial District, Samuel Anyanwu, in the governorship primary, emerged the standard-bearer. Ihedioha, with a strong political faith in his followers, embarked on an aggressive campaign in all the 27 local government areas of the state. The move yielded results for him and the party, as he emerged winner and was returned by the Independent National Electoral Commission (INEC).

Ihedioha would hold sway in Imo State as the elected governor for seven months and two weeks (May 29, 2019 – January 14, 2020), when the Supreme Court surprisingly sacked him and declared Senator Hope Uzodimma as the duly elected governor of the state. The development saddened lovers of Ihedioha and residents of Owerri metropolis, who wore long faces on the day Ihedioha was relieved of his post. Protests on the streets of Owerri also followed his ouster. Many residents of Owerri and environs, who spoke to The Guardian at the time, were moody.

Why were they so sad about Ihedioha’s sack? They confessed that within the short period the former federal lawmaker was in power, his administrative acumen had begun to show in slow and steady articulation of bureaucratic restoration, which had been lacking in the eight years of Okorocaha’s reign. Retirees, who were not paid as and when due, were verified and promptly began receiving their pensions. The policy was well received by many, because virtually every home in the state has at least a retiree. Things began to look up for most Imo family, who are mostly into civil service jobs.

The judiciary truncating Ihedioha’s hold on power inevitably affected the PDP that had begun to bounce back in the state. The usual ‘Any Government in Power’ (AGIP) personalities started exiting the then ruling party. The state chairman, Charles Ezekwem suddenly tendered his resignation. Ihedioha had appointed him chairman of Heartland Football Club.

Ezekwem’s exit led to the ascension of power of Martin Ejiogu as the state’s acting chairman of the party. He has remained in acting capacity till date pending when the state’s congress will be conducted, according to the publicity secretary of the party.

Not too long after, the Publicity Secretary of the party, Damian Oparah, also resigned his position, citing alleged lack of internal democracy in PDP as he witnessed in the ward congresses. Oparah and other state executive committee members, who resigned from PDP, later decamped to the APC. Nature, they say, abhors vacuum; the party’s leadership quickly appointed the former Special Assistant to then Governor Ihedioha, Ogubundu Nwadike as acting Publicity Secretary of the party to replace Oparah.

Another blow for PDP was when about 23 members of the party in Imo State House of Assembly, including the Speaker, Dr. Chiji Collins, decamped to APC to lend credibility to the ruling party APC in the state and stabilise the young government of Governor Hope Uzodinma. At the moment, there are only four PDP members in the 27-member state legislative assembly.

Scores of the defectors, who were received by Uzodimma at Government House, Owerri, said they were confident that APC was the best political fold to identify with. But in a move to reposition the ailing PDP, the leadership of the party on July 12 appointed a seven-member disciplinary panel among other things to instill discipline and restore confidence among members.

The internal memo of their appointment was signed by the state’s secretary of the party, Nze Ray Emeana, and a broader statement to that effect to the press was signed by the state’s Publicity Secretary, Ogubundu Nwadike. It reads in part: “The Peoples Democratic Party (PDP) in Imo State has appointed a new State Disciplinary Committee. That was communicated via a statement to that effect entitled: “To Whom It May Concern, Composition Of Disciplinary Committee”. It was dated July 13, 2020 and signed by state secretary, Hon. Nze Ray Emeaña.

The statement further reads: “The State Executive Committee has approved the composition of a State Disciplinary Committee as provided for by section 57(1) and (2) of the party’s constitution.” Chairman of the Committee is Sir Bon Unachukwu while members include Hon. Oliver Enwerenem, Nze Law Biaduo, Mr. Nkiru Ibekwe, Mr. Ogubundu Nwadike, Mr. Josiah Eze, and Mr. Kissinger Ikeokwu. The statement said the appointments took effect immediately.

The committee was subsequently inaugurated by the state chairman, Ejiogu, in the presence of Emeana, the Treasurer, Josiah Eze, the Auditor, Chief Godson Nwaobasi, and Nwadike. Ejiogu commended the State Executive Committee of the party for approving the caliber of Committee members. He also thanked the committee members for accepting to serve the party. He charged them to remain “upright, ensuring equity and justice in the discharge of your tasks” without fear or favour, assuring them that they had the backing of the party’s constitution.

Ejiogu said the primary objective of the party under his watch in the state was to reposition it to its premier position of large followership and returning power to the party in the state.

According to Ejiogu, “Imo is PDP state. Our concern is to restore confidence of the people by taking over power that belongs to us through constitutional means. Everybody must work hard to achieve this.”

In his response, the chairman of the panel, who was in Ihedioha’s cabinet as Commissioner for Lands, Unachukwu, said they would justify the confidence reposed in them by the leadership of the party through the appointment. He said though the party was witnessing challenges, the panel would contribute its quota in rebuilding it to public confidence and wooing former members to return to the fold.

One of the challenges the party recently experienced was when the state government took away two Hilux vehicles from it. The state government’s officials, who came to take the vehicles away, claimed that they were owned by Imo State Government and given to the former chairman of Imo Housing Corporation, Nze Emeana, while the other one was attached to the office of the chairman during the reign of Ihedioha.

While speaking to The Guardian on the repositioning of the party, a member of the disciplinary committee, Mr. Oliver Enwerenem, expressed confidence that the party would bounce back to power.

His words: “Our party, the PDP, is poised to come back to power. You will understand that Imo people voted for us. You witnessed what happened when the Supreme Court pronounced Senator Hope Uzodimma governor. The state was like a grave yard.”

Enwerenem, who was a two-term member of Imo State House of Assembly (1999 -2007) and Special Adviser to Ihedioha on Technical and Vocational Education, said as a member of the disciplinary panel, he would contribute his quota to ensure that things went well in the party.

He said: “We are going to work hard to ensure that PDP retains its public acceptance. It has a brand that must be protected. Our members must be disciplined in their approach on political issues. That is our goal. Power would return to us in the next election. The people will return power to us. We are repositioning to achieve that.”

The issue of who leads the party in the state has also been rested. Ihedioha retains the party’s leadership. The choice of the immediate past governor of the state to continue being the leader, The Guardian learnt, is premised on “the quality leadership he offered the people of the state when he governed briefly.”

Ihedioha, sources say, is angling to return to power in the next governorship election despite the problems the Supreme Court threw his way in January. Although he is yet to return to Imo State from Abuja since he was ousted from office, he is being accused by his opponents of clandestinely plotting to return to power by outwitting Uzodimma by proxy.