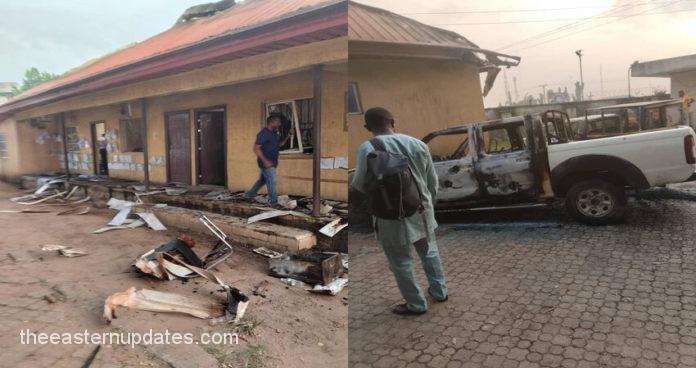 Unknown gunmen suspected to be members of the Eastern Security Network (ESN), militants have attacked the Independent National Electoral Commission, INEC, office in Imo State, killing one in the process.

The Eastern Updates gathered that the gunmen, who were about 20 in number, operated with two SUVs, one blue-coloured Lexus, and an ash-coloured Highlander.

The dead body of the slain guard has been deposited at the morgue.

When reporters contacted the Imo Police Public Relations Officer, PPRO, Henry Okoye, he said he was yet to resume duty but asked to reach the former PPRO, Mike Abatam, who refused to comment on the development.

Recall that no fewer than three persons have been reportedly killed in a Saturday attack on the country home of the spokesman of the Coalition of United Political Parties (CUPP) Ikenga Ugochinyere-Imo in Umukegwu community, Akokwa, Ideato North Local Government Area of Imo state.

According to sources who spoke to The Eastern Updates, the gunmen invaded Ugochinyere-Imo’s house where he was having a meeting with some of his supporters and started shooting sporadically as people scampered for safety.

In the process, three persons including the CUPP spokesman’s uncle simply known as Dan were killed. Some vehicles and campaign materials within the premises were also set ablaze.