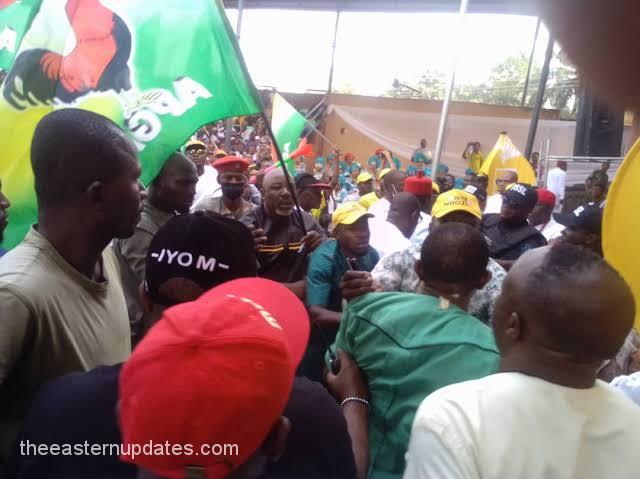 It was a display of rascality and disgrace at the 2023 Igu-Aro festi­val of Enugwu-Ukwu community in Njikoka local government area of Anambra State as supporters of Sen. Uche Lilian Ekwunife and Ferdinand Dozie Nwankwo dis­rupted the festival.

The fracas which had halted the annual cultural festival was said to have been ignited when the incumbent Senator representing Anambra-Central in the Senate and candidate of the Peoples Democratic Party (PDP) for the 2023 Anambra-Central senatorial election, Uche Ekwunife, and her supporters forced themselves into the arena with PDP flags and um­brellas even when announcements were made that no such thing should come into the arena as it was not a political rally.

Meanwhile Ferdinand Dozie Nwankwo who is currently repre­senting Dunukofia, Njikoka, and Anaocha Federal Constituency in the House of Representatives, who also doubles as the APGA candi­date for the 2023 Anambra-Central senatorial election, was patiently waiting outside the civic centre to­gether with his supporters, having been directed not to bring in APGA flags into the cultural carnival.

Uche Ekwunife who was ac­companied by Rita Edochie, a popular Nollywood actress and other supporters broke the proto­cols and forced themselves into the Igu-Aro festival with PDP flags and other items.

This ignited an uproar in the arena and prompted Dozie Nwankwo and his supporters to do likewise thereby turning the Igu- Aro Enugwu-Ukwu festival into a war front as supporters of both candidates closed-in on themselves amidst security interventions.

However, Uche Ekwunife’s ac­tion was totally condemned by the elders and traditional institution of Enugwu-Ukwu community as some people attested to the fact that it was Sen. Uche Ekwunife’s stock in trade to cause confusion and rancour at events such as the Igu-Aro Enugwu-Ukwu festival. Uche Ekwunife and her support­ers vacated the arena in the midst of the frenzied atmosphere.

Chief Chika Nwana, Chair­man Umuagwu village Enug­wu-Ukwu, who spoke with jour­nalists about the fight between Uche Ekwunife and Dozie Nwank­wo’s supporters, said no one ever expected that such would happen. Nwana noted that even though it is the season of political activities, that politicians should endeavour to accommodate themselves and avoid shedding blood. Chief Nwana said someone sustained a very serious injury from the fight that erupted between supporters of both candidates. He said the young man’s head was broken in the course of the fracas. He however advised politicians to tolerate one another as only one person will emerge winner in ev­ery contest.