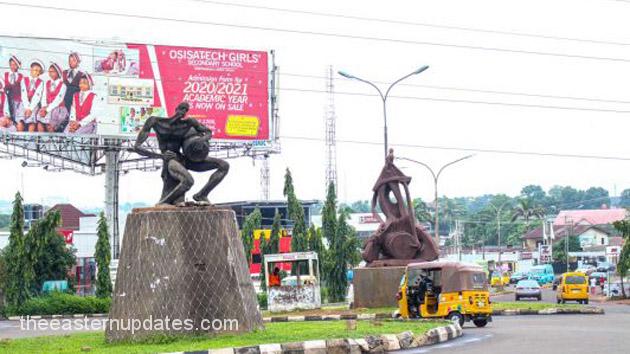 The Eastern Updates reports that a group show put together by Otsholeng Poo, and convened by the Isama Ajie of Asaba, Chief Chuck Nduka-Eze, titled, Asaba Memorial, ended at the Red Door Gallery Victoria Island, Lagos.

Recall that the show is the first major one to institute a memorial park in honour of the victims of the massacre in 1967.

It is a captivating selection of work by Nigerian artists that provokes awareness and recognition of the tragic event in the country’s history and aims to support the development of the Asaba Memorial Park, a cultural monument in honour of the victims of the Asaba massacre of 1967 are on display.

It offers a rare insight of the massacre. It covers the emotional complexities of a forgotten peaceful community with compelling stories on the trajectory of the horror and the growing realisation of the extent of the massacre during the Nigerian civil war. It simultaneously critiques the government and global communities’ inaction to the atrocities that took place and questions commonly held assumptions about the massacre, and challenge visitors to consider the responsibilities and obstacles faced by those who managed to survive: from young widows, women and children to soldiers, who made difficult choices, to effect change and in a few cases, took significant risks to help victims on that fateful day.

Read Also: Biafra: Buhari Reveals What Must Be Done To Avoid Civil War

The exhibition features works from over 20 artists, including, In Memoriam, a monumental canvas piece with the names of some of the victims by a 12-year-old artist – Kanye Okeke, who created this work for this show and Victor Ehikhamenor’s Black Peace (2022), part of the series, which was featured as the book cover of Elizabeth Bird and Fraser Ottanelli’s book, titled, The Asaba Massacre: Trauma, Memory, and the Nigerian Civil War. Also on view is a body of work donated by Enotie Ogbebor, the son of a senior military officer in the Nigerian army, who provided an eye-witness account of the atrocities that occurred in Asaba and renowned fashion designer Ade Bakare’s Ogbueshi – a Guipure cotton lace with red paint and soil that depicts the fate of Chief Mariam Babangida’s father – the late Ogbueshi Leonard Nwanonyei Okogwu, who was to give the welcome address to the soldiers on behalf of the Asaba community on that fateful day. In addition, Ben Enwonwu’s 1967 painting about the Civil War, War Dreams and Ben Onobrakpeya’s 1972 painting, Ayo Players, are among the collection’s oldest works.

Speaking on the event, Chief Nduka-Eze explained the importance of using art as a powerful catalyst for bringing awareness to important issues that receive only marginal attention. ‘To date, there has been no proper explanation or official apology from the Federal Government of Nigeria for the humanitarian crime. We encourage everyone to come and explore the exhibition. It will challenge people not only to ask, ‘what could have been done?’ but also, ‘what can we do?’ This is the first step to creating a memorial site that is accessible and dignified in its representation to honour the victims, a place that will be a community symbol of all the lives lost and extend to encompass a cultural and recreational attraction for both local and international tourists,‘ he said.

The Eastern Updates reports that the show is part of a series of remembrance activities to support the development of a permanent physical space – a world-class nature park, monument, artistic and cultural centre in honour of all those who lost their lives and were displaced by the Asaba massacre. The Memorial Park will have, as its foundation, 1,000 trees as a symbol of all the lives lost. It will be a legacy project that finally gives homage to the victims, their families and becomes a place for reflection on healing for Asabans and all Nigerians.