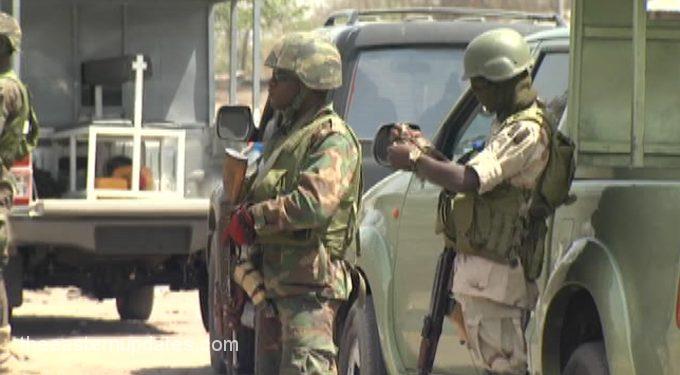 Anambra State Government have expressed sadness over the activities of the Army in the state, alleging that it has converted its checkpoints to extortion points.

Commissioner for Information in the state, Mr. Paul Nwosu, in a statement, flayed soldiers at various checkpoints for mass extortion of drivers, and other road users instead of looking for the criminals terrorising the state.

In the statement titled: ‘checkpoints or extortion-points’, the government wondered why the army had not apprehended any of the criminals that have been unleashing terror on the state since it has checkpoints scattered across the state.

‘It is a tragedy that the checkpoints manned by military men on literally all the roads across the state have precipitated punitive gridlocks, where the mass of Yuletide vacationers are argonously trapped for many hours, an experience which the state government had worked hard to avert at this period.’

Read Also: Army, Others Deployed To INEC Offices In Imo Over Attacks

‘The recent practical experience of the Deputy Governor of Anambra State, Dr. Onyekachukwu Ibezim, in courageously confronting the soldiers on the Amansea end of the state calls for grave concern.

‘It seems these military men manning the checkpoints have turned these places into toll points this season, thereby causing traffic jams and thwarting government’s effort to ensure free flow of traffic.

‘The case of Amansea is particularly instructive because the Deputy Governor had warned the military personnel earlier in the day to allow traffic move smoothly, but immediately he left they resumed the unwholesome checkings.

‘The sad aspect is that the military personnel are obviously not apprehending the hoodlums harassing the state. What then is the use of blocking roads at this time when there is no particular intel to track an impending crime or fleeing criminals?

‘This leaves one with one conclusion: that the long traffic jams are orchestrated just to extort money from drivers and motorists.

‘This pernicious attitude to traffic management by our military is condemnable. The security of the state must not be compromised on the altar of making filthy lucre by men who ought to protect the people.

‘Military subordination to civil authority should be emphasized forthwith and henceforth’, the statement reads.

The deputy governor’s experience referenced by the commissioner, reportedly happened on Friday, December 23 at the Amansea axis of the Enugu – Onitsha expressway.