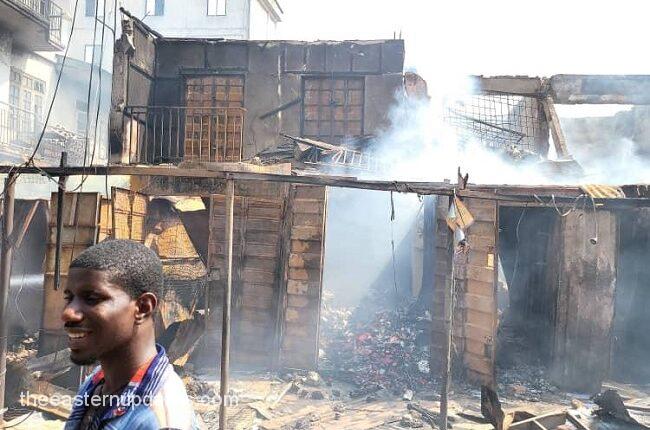 On Sunday afternoon, a one-storey building office apartment in Onitsha, Anambra was gutted by fire which is yet to be ascertained.

The incident is contained in a statement signed by the Director/Fire Chief of Anambra Fire Service, Mr. Martin Agbili, and made available to newsmen in Onitsha.

According to the statement, at about 1.00 p.m. on Sunday, the Anambra State Fire Service received a distress call that there was a fire outbreak at No 52 Awka Road, Onitsha, housing a one-storey building office apartment.

‘I immediately deployed our fire truck and our ever-ready and fearless firefighters to the fire scene.

‘They went into action, battled the fire, controlled and fought it to a standstill,’ he said.

The fire chief said that the cause of the fire is a suspected power surge, saying that no life was lost during the fire incident.

Agbili stressed the importance of always switching off all our electrical and electronic appliances, especially when it is not in use.

In another report, the government of Anambra state yesterday reiterated the ban on the use of fireworks, knockouts, as well as their sales this yuletide.

The Eastern Updates reports that state police command’s public relations officer, DSP Tochukwu Ikenga, in a statement on Thursday noted that it is ‘a part of proactive measures to sustain public safety and peace in the state’.

The state commissioner of police, CP Echeng Echeng, in the release, said ‘the use of knockouts and others, aside from constituting nuisance and disturbance of public peace, is also capable of causing unnecessary fear and apprehension and other dangers associated with their usage, especially during this harmattan period.’

This is in addition to the possibility of providing an escape space for criminals after the commission of crimes, the CP added.