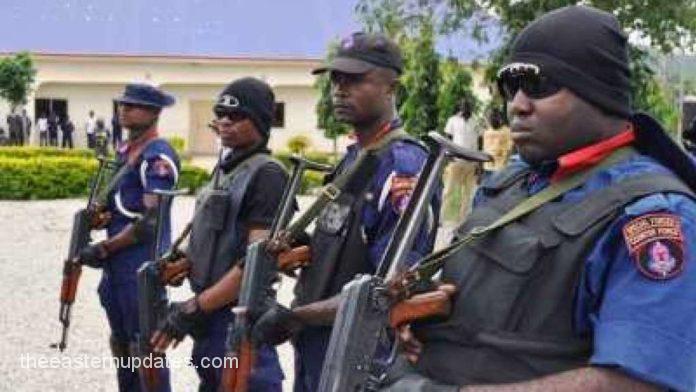 The Nigeria Security and Civil Defence Corps has deployed about 1,931 officers in Anambra ahead of the Christmas and New Year celebrations.

The NSCDC explained the deployment of the security operatives is in view of the expected increase in economic activities, movement of people as well as several church and social activities which may attract large crowds during the forthcoming festive season.

It assured the people of adequate security during the Yuletide, adding that all critical national assets and infrastructure would be protected during the celebration.

These were contained in a statement on Monday signed by the Public Relations Officer, NSCDC, DSC Okadigbo Edwin.

It read, ‘In view of the expected increase in economic activities, movement of people, as well as several church and social activities which may attract large crowds during the forthcoming festive season, the NSCDC, Anambra State Command, under the leadership of Commandant Isidore Chikere, assured the people of adequate protection of lives and property.

‘This is coupled with all the critical national assets and infrastructure in the state during the celebration.

‘The command has put in place adequate security measures in collaboration with its sister security agencies and all critical stakeholders to ensure a peaceful and orderly celebration of the Yuletide season.

‘Consequently, the state Commandant has ordered the deployment of 1,931 officers and men drawn from the Tactical Squad,  Operations Department, the Anti-Vandal Unit, the Agro-Rangers, Counter Terrorism Unit,  the Rapid Respond Unit, Special Female Squad, Chemical, Biological Radioactive Nuclear  Energy Unit, Critical National Assets and Infrastructure Protection Department and the Department of Intelligence and Investigation for both foot and mobile patrols as well as the fixed-point presence and increased-led operations across churches, event/recreational centres, motor parks, markets identified routes and flashpoints among others.

‘Personnel deployed for this critical assignment are under the strict instruction of the state commandant to be civil but firm in the discharge of their duties.

‘Furthermore, the Command is prepared to deal with hoodlums, political thugs and other disgruntled elements that may attempt to cause break down of law and order before during and after the festive period.

We equally enjoin the people to cooperate with NSCDC and other security agencies, in their efforts towards ensuring peaceful celebrations and report any suspicious person or object to the nearest NSCDC  formation in all the 21 local government areas of the state or call the Command emergency phone number 0806 676 9442.’