HomePoliticsOhanaeze Reacts To Alleged Killing Of 100 Northerners In SE
Politics

Ohanaeze Reacts To Alleged Killing Of 100 Northerners In SE 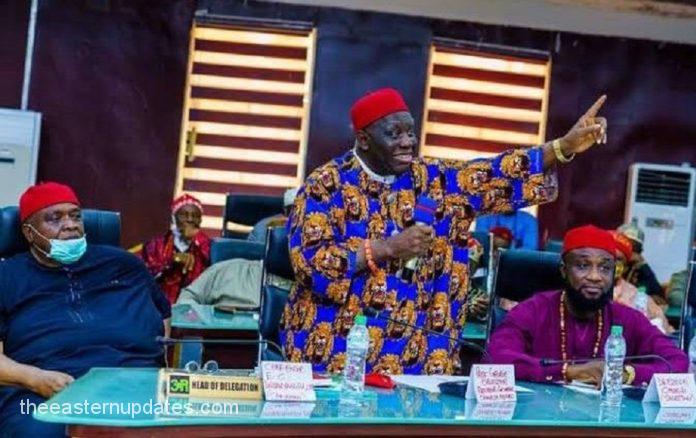 Apex-Igbo socio-cultural organisation, Ohanaeze Ndigbo has called on the security agencies in the country to compel the coordinator of the Northern Consensus Forum, Dr. Auwal Abdullah Aliyu, to provide any proof for his claim that more than 100 northerners were murdered in South East zone last week by the Indigenous People of Biafra (IPOB).

The national publicity secretary of Ohanaeze Ndigbo, Dr. Chiedozie Ogbonnia, in a statement he released on behalf of the group’s president-general, Ambassador George Obiozor, described Aliyu’s claim as a “lie from the pit of hell”.

He also urged the security agencies to caution Aliyu over his call on northerners who are bringing food items to the South East zone, and drives the trucks to shun transacting businesses in the zone.

Ogbonnia said Aliyu’s claim of a massacre of 100 northerners as published in one of the popular tabloids in the North was politically-motivated to create hatred from the electorate in the Northern Nigeria towards the presidential candidate of the Labour Party (LP) in the 2023 general election, Mr. Peter Obi, because the latter is an Igbo man, and, because his presidential ambition was enjoying overwhelming support of the electorate across the country, including the North.

He said if any northerner, and, indeed “not less than 100 northerners were murdered in the South East by the Indigenous People of Biafra” there were more credible and known leaders of northerners in the zone, including Sarki Hausawa in Enugu who would have raised such an alarm and not Aliyu.

The Ohanaeze spokesman insisted that the security agencies should stop at nothing in getting Aliyu to prove his claim, otherwise, his claim had “reduced the worth of a Nigerian to that of a chicken that could be slaughtered in hundreds within a week” in the eyes of the international community.

Stating that by trying to create hatred towards the Peter Obi’s presidential ambition from the electorate in the North because the latter is an Igbo man, the Ohanaeze spokesman argued that Aliyu was only acting like a chauvinist pointing out that the people of the South East have had a history of robust political alliances with the North dating from the pre-Independence era till date.

For instance, Ogbonnia noted that the first Mayor of the City of Enugu ( heart of Igbo land), elected in1952 was a Fulani man, Mallam Umaru Altine, and, that he was re-elected into the office in 1958, adding that in 1959, an Igbo man, the late first president of Nigeria, Dr. Nnamdi Azikiwe supported, Alh. Tafawa Balewa to become the Prime Minister of Nigeria.

Though Ogbonnia expressed regrets that various forms of Insecurity including banditry, kidnapping, herders/farmers clash, etc, have become a common experience nationwide, including in the South East, the situation would have been reduced in the zone if the federal government had listened to Ohaneze and freed the leaders of the IPOB, Nnamdi Kanu who is currently being detained in Kuje prison from where he has been facing trial bothering on treason.