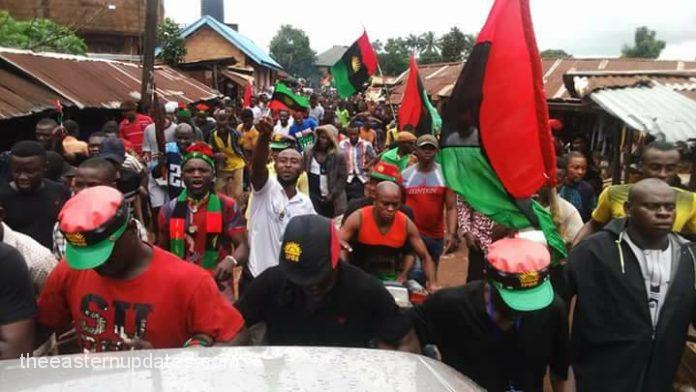 The Indigenous People of Biafra (IPOB) has issued a stern warning to traditional rulers and people of Ngor Okpala Local Government Area, Imo State not to contemplate giving in to pressure to accept the Ebubeagu operatives into the community.

According to the secessionist group, if the traditional ruler of the Ngor Okpala LGA, Eze Fred Nwachukwu by any chance allows the Ebubeagu operatives into the community, then they should be ready for the consequences of his action.

The Eastern Updates reports that IPOB had in a statement signed by its Publicity Secretary, Emma Powerful, accused the Ebubeagu operatives of collaborating with terror herdsmen and security agents operating in Imo State to attack, kill and burn down communities.

Ebubeagu is a regional security organization put together by governors of the South-east to tackle the security challenges in the region, which is linked to the Biafra agitation.

The group however pointed out that before Eze Nwachukwu allows for the Ebubeagu militia to be deployed into the LGA, he should enquire what the people of Orlu Province and Okigwe Province are going through in the hands of the operatives.

The statement partly reads, ‘We are monitoring those behind the plans to deploy and set up Ebubeagu security office at Umuneke old Post office. The people of Umuneke and Ngor Okpala Traditional Council are digging their graves by contemplating or succumbing to the pressure from any quarter.

‘Before the people of Ngor Okpala accepts Ebubeagu deployment in their communities, they should go to local governments in Orlu Province and those in Okigwe Province and see what the people are facing in the hands of Ebubeagu militia.

‘Umuneke and the entire Ngor Okpala people must resist the evil plans or they will face the consequences which include killing their people, burning their homes and displacement of their people.

‘IPOB is warning Eze Fred Nwachukwu don’t say we didn’t warn you that we don’t want Ebubeagu outfit in Umuneke Ngor or anywhere in Ngor Okpala LGA otherwise they will dance the music IPOB and ESN operatives will play for him and his collaborators. Nobody should blame IPOB for taking any action because Ebubeagu militias are state-sponsored terrorists against our people and we won’t allow them to continue.’

The Eastern Updates reports that the Ebubuagu agents and ESN have clashed severally in recent times.