HomeFeaturesUmahi Vows To Smoke Out Killers Of Ebubeagu Officers
Features

Umahi Vows To Smoke Out Killers Of Ebubeagu Officers 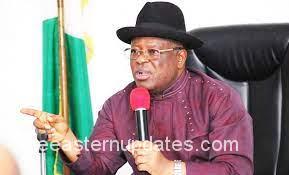 Reports reaching the desk of The Eastern Updates have that no fewer than two members of the Ebubeagu Security Outfit have been killed in Abakaliki, the capital of Ebonyi State after they were attacked by gunmen.

According to reports, the ugly incent occurred last night at the popular Ebebe Junction, a few metres away from the police headquarters and the Old Government House, Abakaliki.

The Eastern Updates gathered that many residents of the area were injured while scampering for safety amid the melee.

An eyewitness, who spoke to reporters on condition of anonymity, stated that, ‘It was last night around 9.30pm. I passed through that place and a full compliment of Ebubeagu operatives cordoned off the location.

“The victims were taken to the Alex Ekuweme Federal Teaching Hospital, Abakaliki. Before they could get there, two of the victims died while others with bullet injuries are now receiving treatment.

‘Everybody around the location of the incident fled inside their houses for fear of becoming victims.’

It was further gathered that the bodies of dead victims have been deposited at the mortuary of the AE-FUTHA.

Meanwhile, the Ebonyi State Government, on Saturday, condemned the killing of the security operatives, describing it gruesome.

The Special Security Consultant to the state government, Chief Stanley Okoro-Emegha, added that an exhaustive investigation had commenced into the matter with a view to fishing out the perpetrators.

He said, ‘This is quite unfortunate, unwarranted and totally unacceptable. We have commenced a thorough investigation and there are reliable information that the heinous crime was committed by the unknown gunmen and opposition political party in the state.

‘The information on our desk may still be sketchy but we are assuring the families of the deceased and the general public of a detailed investigation in order to make the perpetrators of this inglorious act face the full weight of the law.

‘For the umpteenth time, anyone behind this dastardly act must pay in full.  It is regrettable that we are losing these able-bodied men who are sacrificing so much to ensure that the efforts of our governor, Chief David Umahi, in promoting peace do not hit the brick wall.

‘You know when men of Ebubeagu are killed, the opposition with her cronies keep a sealed lips as if these men are not brothers or humans. As we sincerely commiserate with the families and loved ones of these young men killed in cold blood, we are also praying for the peaceful repose of their souls.’

The Eastern Updates reports that clashes between Ebebeagu operatives and gunmen has become frequent in recent times.