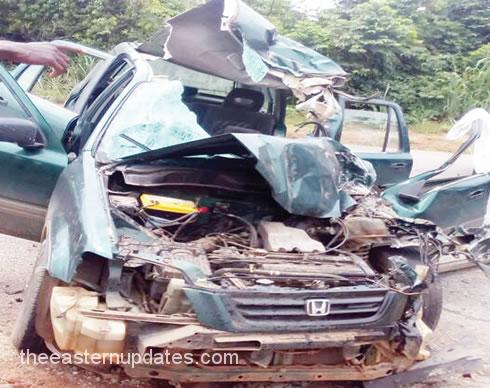 The Federal Road Safety Corps (FRSC) on Friday morning confirmed the death of one person in a crash that happened along Enugu Abakaliki Federal Highway in Enugu State.

The state Sector Commander, Joseph Toby, who confirmed the incident to reporters disclosed that the crash which happened on Thursday afternoon was caused by excessive speed, adding that two other persons sustained varying degrees of injury in the accident.

Toby said, ‘The accident was fatal. It was as a result of excessive speed that led to loss of control. It is a mini-commercial bus which was carrying one passenger and because he was on speed, he ran over someone trying to cross the road.

‘Unfortunately, the driver was burnt to death. The person he knocked down and a passenger were rescued and had been taken to the hospital.’

Read Also: What We Are Doing To Reduce Road Accidents In Anambra – FRSC

In another development in Lagos State, the Permanent Secretary, Lagos State Emergency Management Agency, Dr Olufemi Oke-Osanyintolu, in a statement on Thursday, said the agency rescued a yet-to-be-identified driver during an accident on Otedola Bridge, in the Berger area of the state.

Oke-Osanyintolu said, ‘The agency’s responders discovered that a low-bed with unknown number plate conveying a mile lift was involved in a solitary accident.

‘Further information revealed that the incident occurred while the driver of the low-bed was trying to avoid collision with a broken down trailer.

‘No mortality was recorded at the scene of the incident but the lone driver sustained injury in the right ankle. The recovery operation is ongoing.’

The Eastern Updates reports that there has been a rise in road crashes in Nigeria in recent weeks.