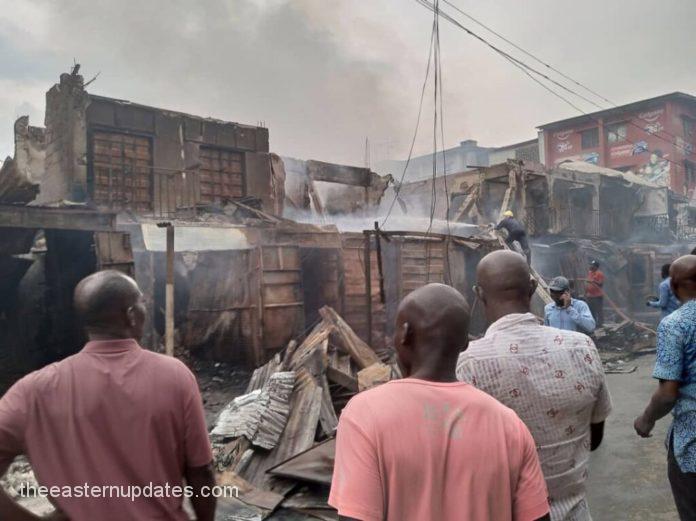 Fire has gutted over 600 shops at a market plaza on Kano Street, near the Main Market in the Onitsha area of Anambra State.

The Eastern Updates gathered that the fire, which started around 1am on Monday, was caused by a power surge from a cosmetic shop in the market.

The fire was said to have escalated to other adjoining shops due to the combustible nature of some of the materials and substances in the market.

As at 5.13pm when this report was filed, fire-fighters were seen battling the fire despite exhausting several tanks of water to salvage the situation.

A trader in the market, John Okonkwo, said goods worth billions of naira were destroyed by the fire which razed over 600 shops in the market.

He said, ‘The plaza belongs to importers and it is a line for all kinds of groceries, cosmetics, wines, provisions and at the moment, items worth several billions of naira have been destroyed by the fire.

‘The fire started with two blocks of shops but later escalated to other shops and then the whole building. Over 600 shops were razed in that plaza.’

The state fire chief, Martin Agbili, said around 2.20am, the agency received a distress call of a fire outbreak at Kano Street behind the Main Market, Onitsha, and they deployed fire trucks and fire-fighters to the scene.

Agbili said, ‘The cause of the fire was suspected to be a power surge which emanated from one of the cosmetics shops in the one-storey building.

‘Due to the highly combustible nature of the materials and substances sold at that area, it contributed to the quick spread of the fire. The fire service was able to fight the fire to a standstill and no life was lost during the incident.’

The state Police Public Relations Officer, DSP Tochukwu Ikenga, while reacting to the development, said the situation was under control.

Ikenga said, ‘The fire outbreak that occurred in the early hours of today at the Onitsha market is under control. There was no loss of life, although goods worth billions of naira have been destroyed.

‘Preliminary information shows that the cause of the fire is as a result of electrical upsurge from a cosmetic store in the storey building. Our personnel are still there monitoring.

‘The command wants to use this opportunity to advise members of the public to always turn off their appliances before leaving the house and offices.’

Reacting to the development, the state governor, Chukwuma Soludo, while commiserating with the owners of the affected shops, described the incident as unfortunate.