HomeFeaturesPanic As Police Checkpoint In Anambra Is Attacked By Gunmen
Features

Panic As Police Checkpoint In Anambra Is Attacked By Gunmen 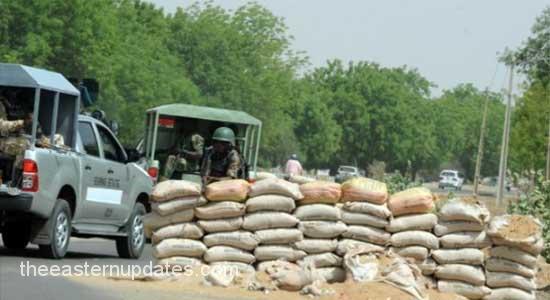 Tension is currently brewing in Anambra State, after a police checkpoint was on Tuesday afternoon attacked by some yet to be identified by gunmen.

The Eastern Updates gathered that some people are feared dead while others are reportedly injured.

The incident occurred at about 10.30am between the Ihiala-Uli axis in Ihiala local government area.

The attack forced drivers and commuters to run for dear lives as the gunmen shot non-stop.

The Eastern Updates gathered that all the security operatives had to remove their uniforms and take cover in nearby bushes and houses.

The Onitsha- Owerri expressway had been abandoned as of the time of filing this report.

Even commercial bus drivers have paused operations for fear of being killed.

The Anambra State Police Public Relations Officer, Ikenga Tochukwu could not be reached for further confirmation.

In another report, about three persons have been apprehended in Anambra State by operatives of the National Agency For Prohibition of Trafficking in Person (NAPTIP) working in collaboration with vigilante operatives for raping a 13-year-old girl.

Chidimma Ikeanyionwu, a Media aide to the Commissioner for Women and Social Affairs, who confirmed the arrest, revealed that the culprits have been handed over to the police and would be charged to court soon.

Ikeanyionwu said: ‘According to the victim, the suspects were co-tenants with them but took her to Nkisi river to rape her after they had an altercation with her father.

‘The victim, while narrating her experience to the commissioner, said she was first slapped by the boys, then dragged to Nkisi before she was ordered to remove her clothes as the suspects took turns to have carnal knowledge of her.’

The Eastern Updates gathered that the victim hails from Ohaozara in Ebonyi State, while the culprits’ names were given as; Sunday, Emelie, Chiedu and Nwa awọ. While only three suspects were arrested, the fourth, Nwa awọ, allegedly escaped when security operatives invaded the neighbourhood at Nkpor, near Onitsha, to arrest them.