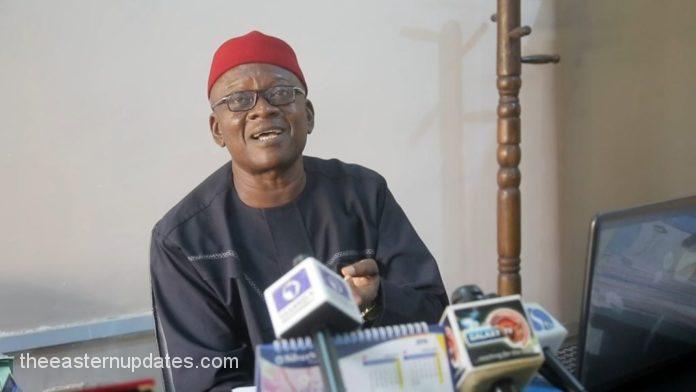 An ex-Commissioner for Information and Tourism, Prof. Vitalis Ajumbe during the past administration of former Governor of Imo State, Rochas Okorocha, has opened up on the real reason he dumped the All Progressives Congress (APC) and quit active partisan politics.

Hinting at the rationale behind his decision which was contained in a letter addressed to the incumbent Imo Governor, Senator Hope Uzodinma which was obtained by The Eastern Updates, Professor Ajumbe who is a founding member of the governing APC in Nigeria, accused the leadership of the APC of poor reward by the national leadership of the APC.

He alleged that the party has relegated him to the background as the national leadership has failed to reward him despite his tremendous sacrifices, as well as financial and moral support to the development of the APC.

The Southeast chieftain explained that he had only benefited from several ministerial and board appointments during the past administration of former Governor, Rochas Okorocha in 2015 based on merit and roles he played to ensure the ex-governor emerge victorious during his 2nd term election, listing the appointive positions as, chairman of the Management Committee of the Imo Broadcasting Corporation, commissioner for Internally Generated Revenue (IGR) and Commissioner of Information, Tourism and Public Utilities.

Ajumbe further reiterated that governing party in the country failed to reward him despite his huge sacrifices for the APC in terms of juicy and befitting appointment since the assumption of office by the present APC-led government in Nigeria.

The ex-commissioner who also recalled his several private meetings with the current Governor of Imo state, Senator Hope Uzodinma at Owerri without meeting with him, lamented that he spent over N5 million of his personal money trying to keep to the appointments with the governor which he did not accord.

According to him in the letter which partly read, ‘your Excellency, for the assignments you gave to me, you made it difficult for us to meet so as to submit my reports. You had invited me on several occasions to come to Owerri for a meeting with you. I would spend my money on flight tickets, hotel accommodations, and other logistics and spend weeks in hotels without meeting you. I have spent over N5 million of my personal money trying to keep to our appointments that never held.

‘Your Excellency, I am deciding that, instead of spending my money so, to remain aloof or leave APC and party politics. I have known that those who suffer for the APC do not get rewarded at last. On 25th of May, 2021, I was appointed and inaugurated as a member of the APC and Presidential Think Tank Committee by Yobe State Governor, Mai Mala Buni who was then National Chairman of the APC on behalf of President Buhari. This position is more of advisory and image laundering and without salary.

‘As an elder at 62 years of age now, my wants are limited. I only work for the good governance of Imo state for my children and those unborn and Imo people. With the level of my national contacts which I have accumulated over the years, I can get my wants without being a member of any political party.’

I want to remain a political consultant for those who know my value. As an elder statesman of this state, Imo, who desires its progress, I am always ready, if called upon, to assist in any way, free of charge, to add value to your administration that will give my state(Imo) good governance.