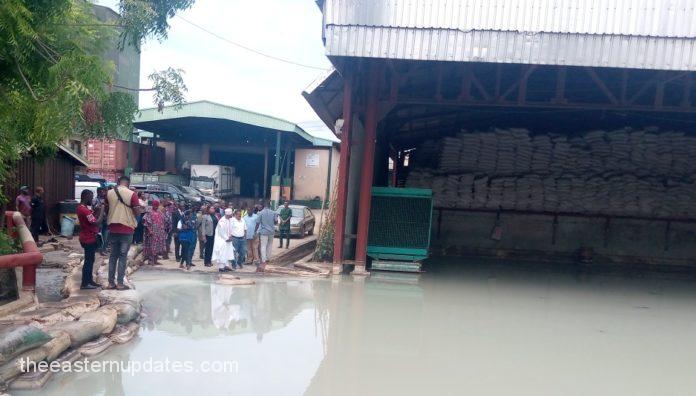 Owners of various companies in Harbor-Bridge Head Industrial Layout, Onitsha, Anambra State are presently counting their losses as infrastructure and equipment worth millions have been destroyed while thousands of jobs are being threatened following the flood disaster that ravaged the area.

This was confirmed to newsmen by the National President, the Manufacturers Association of Nigeria (MAN), Otunba Francis Meshioye when he visited the layout in the commercial city to ascertain the level of damage done on factories in the area by the flood disaster.

The Eastern Updates reports that the Harbor Bridge Head Industrial Layout, which is on the bank of River Niger in Onitsha, plays host to numerous top level manufacturing companies in the Southeast.

Meshioye, who commiserated with the State Government over several deaths recorded in the deluge, as well as his members and others whose facilities were affected, urged Federal Government to explore Public Private Partnership (PPP) windows in finding lasting solutions to the perennial flood disaster.

Meanwhile, members of Umueri Community in Anambra State have expressed appreciation to the wife of the state Governor, Mrs. Nonye Soludo for her quick response to their call for more government interventions to the plight of flood victims in the area.

It would be recalled that the President General of Umueri community, Ambassador Chief Johnny Chukwudi Metchie had on Tuesday, lamented the unprofessional manner in which activities in the Internally Displaced Persons (IDPs) camps are being handled.

Metchie who is also the African Director of the International Association of World Peace Advocates, made the observation when he visited some IDP camps and expressed shock over the absence of both the National Emergency Management Agency (NEMA) and the State Emergency Management Agency (SEMA) in the management of the IDP camps, warning that there could be outbreak of diseases if nothing is done and urgently too, to address the issues raised.