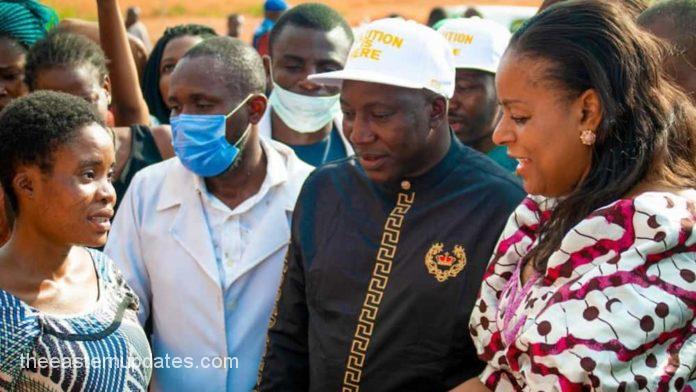 Members of Umueri Community in Anambra State have expressed appreciation to the wife of the state Governor, Mrs. Nonye Soludo for her quick response to their call for more government’s interventions to the plight of flood victims in the area.

It would be recalled that the President General of Umueri community, Ambassador Chief Johnny Chukwudi Metchie had on Tuesday, lamented the unprofessional manner in which activities in the Internally Displaced Persons (IDPs) camps are being handled.

Metchie who is also the African Director of the International Association of World Peace Advocates, made the observation when he visited some IDP camps and expressed shock over the absence of both the National Emergency Management Agency (NEMA) and the State Emergency Management Agency (SEMA) in the management of the IDP camps, warning that there could be outbreak of diseases if nothing is done and urgently too, to address the issues raised.

In a quick response, the wife of the state Governor, Nonye Soludo, on Thursday, visited the Unity Hall, Umueri, where the IDPs are been camped by the state government.

Mrs. Soludo who went with officials of the World Health Organisation (WHO), the state commissioner for health and others, told the IDPs to hold on to hope as the government and people of the state are with them all the way, adding that she personally understood their present hardships.

The Governor’s wife assured the victims of every support that they need while still at the center, adding that government is doing everything to ensure their welfare.

Mrs. Soludo who donated several items including food, medicines and others to the victims, spoke passionately on special care for pregnant and nursing mothers, children and the elderly, and asked them to always sleep under mosquito nets which were given to them.

Responding to Mrs. Soludo’s visit to the Umueri IDP camp, Chief Metchie said it was such a relief to him and the entire members of the community as the victims have been reassured that the state government is not only responsive, but also proactive to the needs of the people.

In a statement on Friday, Chief Metchie said that it is only when those in authority and other stakeholders work together, that difficult situations can be overcome.