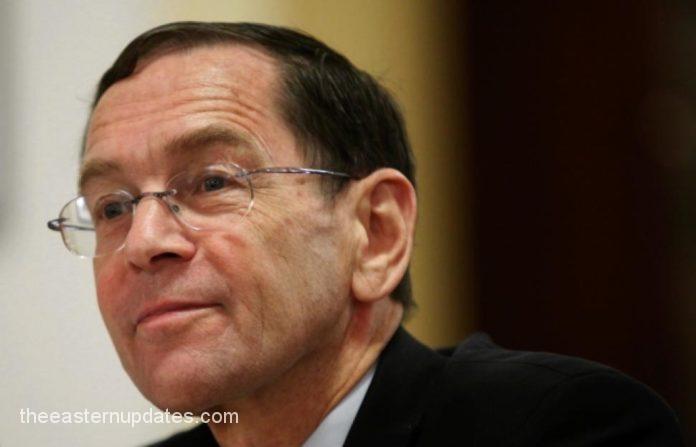 Bruce Fein who is the United States, US, counsel to Mazi Nnamdi Kanu, leader of the Indigenous People of Biafra, IPOB, has finally dragged the Nigerian President, Muhammadu Buhari and the Attorney General of Nigeria, Abubakar Malami before the United States Senate and the House of Representatives.

In his petition, Fein had also urged the United States Senate and the House of Representatives Committee Chairmen to sanction President Buhari and Malami over Kanu’s continued detention, despite the Appeal Court judgment.

He urged the US legislature to recommend that President Joe Biden sanctions Buhari and Malami for violating human rights and flouting court orders to release Kanu.

He urged the congress not to allow Buhari and Malami to get away with such rascality.

The letter is coming after the Nigerian Government refused to obey a court order for Kanu to be released.

To this end, The Nigerian Government dragged Kanu before the Supreme Court.

In the appeal before the Supreme Court, the Nigerian Government faulted the appellate court’s judgment.

It argued that the IPOB leader was a flight risk, hence can’t be released.

Full text of the letter below:

“Mr. Kanu has been illegally detained in solitary confinement in cramped quarters for sixteen (16) months without adequate access to needed medical care or to counsel by Nigeria’s State Security Services controlled by President Muhammadu Buhari and Attorney General Abubakar Malami.

“Mr. Kanu’s detention followed his kidnapping, torture, and extraordinary rendition from Kenya in June 2021 to retaliate for advocating a Biafran independence referendum modeled on the United States-brokered 2011 referendum for South Sudan. Mr. Kanu opposes the use of force with the sole exception of self-defense.

“On July 20, 2022, the United Nations Human Rights Council Working Group on Arbitrary Detention issued an Opinion finding Nnamdi Kanu’s detention in violation of sixteen (16) international human rights guarantees. The Opinion ordered his ‘immediate and unconditional release.’ Opinion, paragraph 107. (See Attachment A). President Buhari and Attorney General Malami have ignored the directive for nearly three (3) months with no indication that compliance will ever be forthcoming.

“In January 2022, following the extraordinary rendition of Mr. Kanu, a Nigerian High Court judgment impliedly exonerated him from the Nigerian government’s Orwellian claim that he had jumped bail in evading its notorious attempted assassination.

“On October 13, 2022, the Court of Appeal of Nigeria, Abuja Judicial Division, Holden at Abuja, decreed that Nigeria’s detention of Mr. Kanu was illegal because of his extraordinary rendition from Kenya in violation of international and state laws. (See Attachment B). The Court ordered dismissal of all charges against him. Again, President Buhari and Attorney General Malami have flouted the Court’s orders and kept Nnamdi Kanu illegally detained.

“The Opinions of the Working Group on Arbitrary Detention and the Court of Appeals of Nigeria speak for themselves. They are crystal clear.

“Accordingly, I would respectfully urge you individually and collectively to recommend to President Joe Biden that he impose sanctions against President Buhari and Attorney General Malami for gross violations of Mr. Kanu’s internationally recognized human rights under the Global Magnitsky Human Rights Accountability Act, 22 U.S.C. 2656 note. The sanctions should include ineligibility for a visa to enter the United States and blocking of all transactions in properties of Mr. Buhari and Mr. Malami in the United States.

“What Nigeria has done to Mr. Kanu is indistinguishable from Russian President Vladimir Putin, Chinese President Xi Jinping, and Saudi Arabian Prime Minister Mohammed bin Salman sending thugs abroad to poison, murder, torture, silence, and intimidate dissidents to their dictatorial regimes. They are a threat to international peace and security and subvert the rule-based international order championed by the United States.

“To permit President Buhari’s and Attorney General Malami’s thuggery to escape with impunity would be unacceptable.”