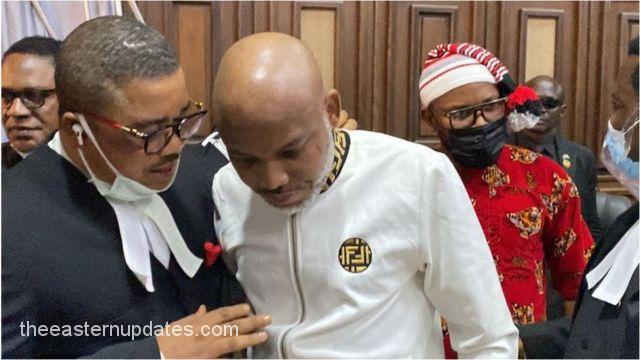 Fresh reports have revealed that the Nigerian President, Muhammadu Buhari has been sternly warned by HURIWA that the further illegal detention of the leader of the Indigenous People of Biafra, IPOB, Nnamdi Kanu, would be considered as kidnapping under legal standards.

The rights advocacy group had noted that the President must stop playing what it describes as the toxic Northern ethnic card and obey the court verdict that had discharged the IPOB leader.

“The position of the Federal Attorney-General on the Court of Appeal’s considered judgment on Nnamdi Kanu is pedestrian, puerile, and laughable,” HURIWA’s statement, signed by Emmanuel Onwubiko, the group’s national coordinator, said.

“Any further detention of Mazi Nnamdi Kanu would amount to active hostage-taking and an outright criminal case of kidnapping, which is actionable. We wonder why a lawyer of Malami’s illustrious status adorning the title of a Senior Advocate of Nigeria is now speaking like a one-hundred-level law student of one road-side law faculty in the corner of Nigeria.

“This holder of the High office of the AGF must take note that history won’t be kind to him for constantly been seen arguing against the principles of the Rule of law when he ought to speak and act as the unbiased chief law officer of the federation and not of Miyetti Allah Cattle Owners Association.”

HURIWA had also further slammed President Muhammadu Buhari’s constituted national security council which recommended that the IPOB leader remains in detention, describing the recommendation as a clear violation of the binding judgement of the appellate court