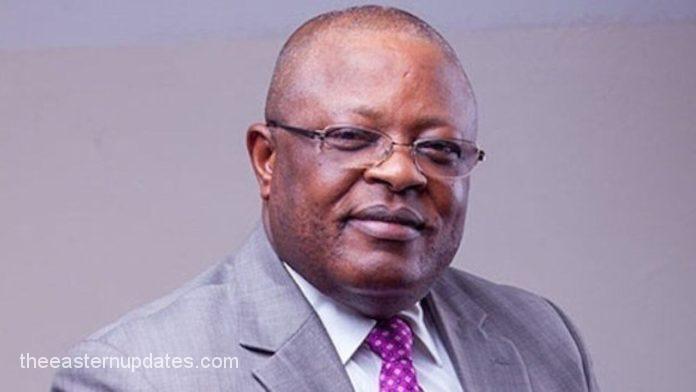 The Commissioner for Information and State Orientation in Ebonyi State, Chief Uchenna Orji has asserted that the conferment of the National Award of CON on Governor David Umahi of Ebonyi State is built on his uncommon demonstration of a vision bearer who has uplifted his people from deprivation to actualization of age long dreams.

Orji, a lawyer in a press statement which was obtained by The Eastern Updates on Wednesday, Ebonyi State capital on Wednesday said Umahi has set very high standards for leaders, within and beyond Ebonyi State.

‘We thank God for decorating him with the ability and passion to perform wonders capable of breaking World record of Africa’s development profile. Indeed, we are indebted to Your Excellency as a people. You have given face to the faceless, hope to the hopeless and meaning to the future of the people of Ebonyi State. We have been emancipated and properly positioned to control our own destiny as a people’, he stated.

He went on to add that; ‘Ebonyi State is now a shining light and flagship of excellence in innovative and transformative governance. We now have the best network of roads in South East built on concrete pavement of 8 inches thickness, highest number of flyovers after Lagos and Abuja, beautiful roundabouts and water fountains to attract creative industry, critical infrastructure for economic regeneration such as David Umahi Federal University of Medical Sciences, President Muhammadu Buhari International Airport and Light Tunnel, State Ecumenical Centre and Shopping Mall that have no march in Africa, new Government House with formidable appurtenances including the Governor’s lodge and Office, the Presidential Lodge and Exco Chambers the State First Lady’s office and Government House Chapel, other massive investments in agriculture, education, health, human empowerment, creation of physical and social environment as well as friendly legislative framework that will attract private sector investment and industrialization in Ebonyi State.”

‘While we thank Mr. President for recognizing the efforts of our dear Governor in building a nation of our pride, we pray God Almighty to continue to lift our Governor in bounds as he brazes for greater service to our fatherland. Once more, congratulations to the Grand Commander of Infrastructural Development and Ebubeagu 1 of South East’.

Umahi was among the 433 people honoured by President Muhammadu Buhari on Tuesday in Abuja.