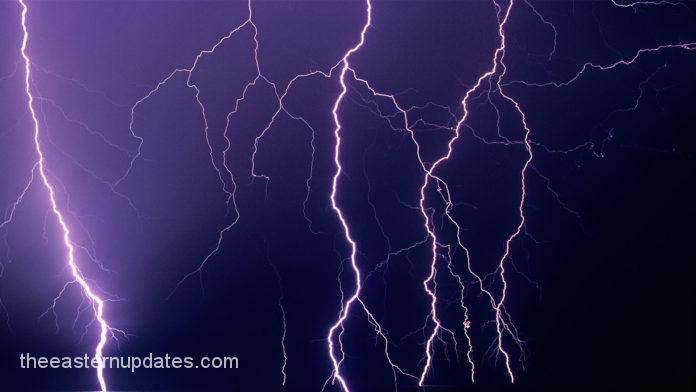 There has been massive turmoil among the people of Ndegwu in Owerri West LGA of Imo State after they had been thrown into shock and mourning following the horrendous lightning strikes in the village which had struck and allegedly killed two persons and injured some four others on Monday evening during heavy rainfall.

The unfortunate victims who have been identified as Mr.Emeka Gerald Mbah, who a 39-year-old from Umuejekaubi Umuahum Ndegwu, and his friend, Mr.Chigbumkpa Ernest Odionyenma, 36-year-old from Umuadi Umuogwuta in Ndegwu Community had died instantly when the thunder had struck during heavy rain at about 5 pm.

Mr. Stanley Opara, an eyewitness, told newsme that the deceased were both married with kids and until their sudden demise were members of the Assemblies of God Church at Ndegwu.

He said the two victims and four others were hired to work as laborers at a building site in Umuogwuta village in Ndegwu when lightning suddenly enveloped the community with the accompanying thunder.

He explained that those who survived were thrown away into the building’s foundation and were seriously injured.

“It was like an electric spark and a heavy thunderstorm that shook the entire community. People were screaming in front of the site and when we rushed out we saw two figures lying down,” he said.

In another report, Some of the communities in Imo State have come under massive flood situations which has completely submerged no fewer than 33 communities in the Ohaji-Egbema Local Government Area of Imo State.

The development had also rendered a lot of people in the affected areas homeless.