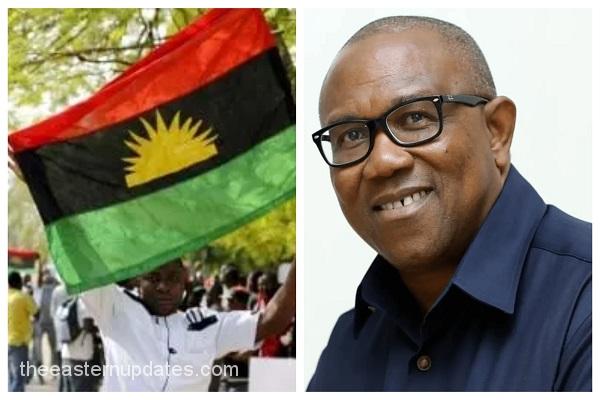 Peter Obi who is the Labour Party, LP, presidential candidate, has come out to downplay some of the recent claims that the Indigenous People of Biafra, IPOB, is a terrorist organization.

Obi had also maintained that the IPOB members are not actually terrorists.

The Eastern Updates had revealed that the Nigerian government had also proscribed IPOB following their recent agitations for the actualisation of Biafra and despite the proscription, IPOB, and its leader, Nnamdi Kanu, had continued to push for the actualization of Biafra.

But, the separatist group had completely denied the terrorist tag which had been slammed on them by the Nigerian government.

However, Obi backed claims that members of the group are not terrorists.

Speaking with Channels Television, the presidential candidate said IPOB members around him do not constitute a threat to the country.

According to Obi: “The only thing I disagree with is naming IPOB terrorist; they are not terrorists. Those who took the decision may have information that I don’t have.

“I stay in Onitsha, and I can tell you that they are people I pass them on the road every day.

“I meet and live with them; in fact, I usually see people gathering, and I have never had the sense of threat or molestation from them, even when they gather.”

In another related development, Omoyele Sowore who is the presidential candidate of the African Action Congress (AAC) has openly condemned the court order which had barred the Labour Party and some of the supporters of its presidential candidate, Peter Obi from holding a rally at Lekki Toll-Gate in Lagos.

It had been previously reported that a Federal High Court sitting in Lagos State had totally barred the Obi supporters who are popularly known as Obidients from converging at the Toll Gate with a court order.

The Obidients had also announced the scheduled ObiDatti23 Forward Ever Rally to be held on October 1, 2022 in Lagos and they planned to converge at the facility before proceeding to other places.

But Justice Daniel Osiagor who had given the order had noted that the LP supporters can pass through the facility for its rally but must not converge there.