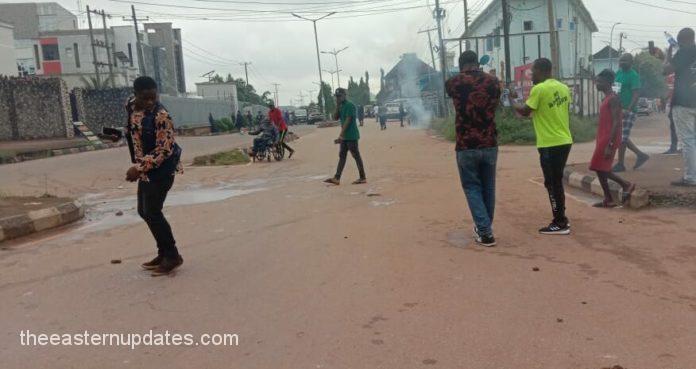 There was massive pandemonium in Abakaliki, the capital of Ebonyi State today where some of the supporters of Peter Obi of Labour Party gathered, Saturday morning, for their one-million-man march.

The Eastern Updates had also learnt that so,e of the Obi’s supporters, popularly called ‘Obidients’ were to take off from the People’s Club area but some thugs allegedly working for another party in the State, stormed the rally venue.

A source which had also  given a full narration of the incident had revealed that the police also moved in, threw teargas canisters, and dispersed the rally.

The policemen were alleged to have claimed that their action was a directive from the Ebonyi State Government.

In a trending video, the youths could be seen running in different directions, with smoke from the teargas billowing.

However, it was gathered that the Obidients have regrouped at the Mile 50 area of the State from where they are going ahead with the rally.

In another report, in lieu of the controversial incident which had occurred today during the political rally for Peter Obi, the Ebonyi State Government has finally revealed that before they had disrupted the ongoing rally for the Labour Party presidential candidate, Peter Obi, in Abakaliki on Saturday, some of the agencies of the government had approved the venue for the exercise for the supporters, but the supporters refused to pay the fee.

The Eastern Updates had earlier reported that pandemonium had broken out in Abakaliki on Saturday when some of the supporters of the former Anambra State governor had gathered for their routine one-million-man march.

Obi’s supporters, popularly called ‘Obidients’, had been billed to take off from the People’s Club area, but some thugs alleged to be working for another party in the state invaded the venue and disrupted the rally.