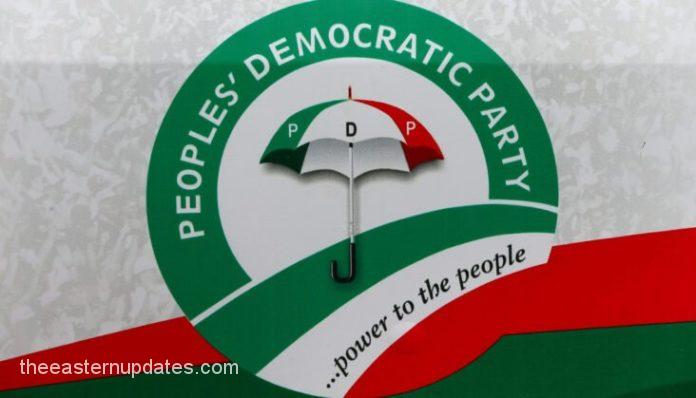 With campaigns set to commence in a few days, confusion still holds sway in the Peoples Democratic Party, PDP, in Ebonyi State.

The Independent National Electoral Commission, INEC, had announced that campaigns would start by the end of this month, September.

Ebonyi was a core PDP State until Governor David Umahi defected to the All Progressives Congress, APC.

And since his defection, the party has been enmeshed in crisis, leading to parallel primary elections.

The reports that even a recent judgement of the Court of Appeal, Enugu Division, has not changed the scenario, with both Senator Obinna Ogba and Mr. Ifeanyi Chukwuma Odii laying claim to the sole guber ticket.

The Appeal Court appears to have left the matter in the hands of the PDP National Executive Committee, NEC.

Read Also: Panic As Ebonyi Teenager Is Beaten To Death By Airport Worker

The crisis in the party could be traced to the emergence of two State chairmen: Tochukwu Okorie and Silas Onu.

The Eastern Updates recall that Silas Onu produced Mr. Ifeanyi Chukwuma Odii, a business mogul, as the Gubernatorial candidate of the Party from the primaries that held on 28th and 29th May, 2022, whereas Tochukwu Okorie produced Senator Obinna Ogba as the governorship candidate of the Party during the primaries that took place on 4th and 5th, June, 2022.

Supporters of the two acclaimed guber candidates; Senator Obinna Ogba and Mr. Ifeanyi Chukwuma Odii have continued to bicker over who is the authentic governorship candidate of the party in the State.

According to him: ‘As of now, I’m the authentic governorship candidate of PDP in Ebonyi, and the Appeal Court has said so. And my opponent has Appealed to the Supreme Court.

‘I’m the authentic candidate as of now, except if the Supreme Court says otherwise.’

But Odii, who is also laying serious claim to the governorship candidate of the Party, said that he is the one duly recognized by the INEC and the leadership of the PDP in Abuja.

In a statement signed and forwarded to newsmen by a chieftain of the PDP in Ebonyi, Mr. Silas Onu, he claimed that, ‘It is abundantly clear that the party has decided to work with the primary elections of 28 & 29 of May, 2022.

‘For the avoidance of doubt, the resolution of PDP’s NEC unanimously ratified the list of candidates of the PDP as submitted to the Independent National Electoral Commission (INEC) by the NWC.

‘Needless to state that the names submitted to the Independent National Electoral Commission, INEC, by the NWC are those of the primaries conducted on 28th and 29th of May, 2022.

‘For emphasis, May I, once again, refer to a holding in the Court of Appeal decision in the appeal by Sen. Joseph Obinna Ogba delivered on 1st September, 2022, to the effect that neither the Court nor INEC can decide a candidate for the political party. So, the PDP has decided and very clearly too.

‘The implication of the decision for NEC is to ratify the decisions and actions of the NWC regarding the names sent to INEC. It is important to mention here that pursuant to Section 31 (3) of the PDP constitution, 2017 (as amended), the decision of the National Executive Committee SHALL be binding on all organs and members of the Party’ he stated.

According to Onu, the Court of Appeal held that there were two primary elections for governorship in Ebonyi, which were held on May 29 and June 5, respectively.

He explained that the Appeal Court went further to hold that where such is the case, the court cannot select, for the political party, the primary election it prefers.

He, therefore, noted that it is up to the political party to decide which of the primaries it wants to rely on.

Facebook
Twitter
WhatsApp
Email
Telegram
Previous article2023: My Wish Is For Either Tinubu Or Obi To Win – Umahi
Next articleIkpeazu, Sanwo-Olu, Others To Attend Abia Day In Lagos